Paul Austin Roche, 87, of Mattapoisett died on November 25, 2016 after a brief illness at St. Luke’s Hospital in New Bedford.

He was the beloved husband of the late Eleanor Roche for 56 years. He was born in Boston, the son of the late John Roche and Mary (O’Toole) Roche. During his life, Paul lived primarily in Boston, Madison CT, Sudbury and Mattapoisett. He was a parishioner of St. Anthony’s Church in Mattapoisett, and was married there in 1957. He was a graduate of Boston English High School, class of 1947 (where he lettered in track) and Boston College, class of 1955 (Business degree). He proudly served as a Sergeant in the Marine Corps during the Korean War from 1950-1953. He worked in the insurance industry for over 30 years, primarily with Liberty Mutual where he met his wife in 1956.

He leaves his four sons, Brian of Southborough, David and wife Patricia of Southborough, Stephen and wife Donna of Hollis NH, and Christopher and wife Kathleen of Westford; and his sister Barbara of Baldwin, MD. He also leaves 11 grandchildren whose visits he so loved, and many nieces and nephews.

His family will receive visitors at the Saunders-Dwyer Mattapoisett Home for Funerals, 50 County Rd., Route 6, Mattapoisett on Friday December 2nd from 10-11:30 AM, followed by a 12 PM Funeral Mass at St. Anthony’s Church in Mattapoisett. Burial will follow at St. Anthony’s Cemetery. For directions and guestbook, please visit www.saundersdwyer.com. 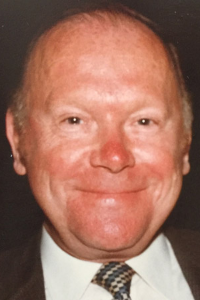