John D. Langlois, a lifelong resident of Mattapoisett, MA, died unexpectedly on his way to work Saturday, June 25, 2016. He was 56-years old. He was the beloved son of Barbara L. (Warburton) Langlois and the late John A. “Chick” Langlois. He was married to his high-school sweetheart, Anne (Fistori) Langlois. They would have celebrated their 32nd wedding anniversary on July 7, 2016.

John is survived by his sons Andrew D. Langlois and his companion, Holly Duncan of Fairhaven, MA, William S. Langlois and his fiancée, Erin McGrath and his daughter, Avery M. Langlois, all of Mattapoisett, MA. He is also survived by his mother-in law Nancy Fistori, brothers and sisters-in law Peter and Amy Trow, Randy and Meg Spence, Paul and Erin Fistori and John and Christine Fistori. He was the loving uncle of Grace, Annie, Josh, Nick, Nate, Johnny, Cameron, Sophie and Cole.

He graduated from Old Rochester Regional High School and Cape Cod Community College. His entrepreneurial endeavors began in 1985 with the opening of J’s Citgo in Mattapoisett. He then went on to own and operate a very successful Interstate Batteries Distributorship. He followed his love of boats and started Ned’s Point Marine at the Mattapoisett Boat Yard. He joined his son Andrew’s landscape business in 2010, and together they formed the thriving Langlois Landscapes, LLC. In 2014 John and Andrew expanded the business with Langlois Landscapes Truck Equipment Rental.

John was an avid boater and happiest when cruising Buzzards Bay on the family Black Watch with his children and friends. His devotion to Andrew, William and Avery never wavered, and he was incredibly proud of their individual accomplishments. His family and friends’ hearts are broken. His death has left a void so great and deep, but he would expect us to be strong and carry on.

In lieu of flowers, John would be honored to have donations made to the Hollandstrong Scholarship in memory of William’s college roommate, Michael Holland, who perished on the El Faro in October 2015. Checks can be mailed to Deborah Roberts, 90 Shea St., Wilton, ME 04294. For online guestbook, please visit www.saundersdwyer.com. 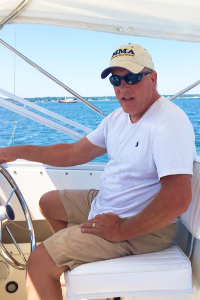