“As a graduate of Boston Girl’s High in 1942, I planned to enter Nursing School at Boston’s Mass General Hospital, but when a recruiter addressed our class and emphasized the urgent need for defense workers to help in the war effort my plan changed. Instead I took the Civil Service Exam and was assigned to the Watertown Arsenal as a machine operator and then to the Navy Yard in Charlestown.

I had never seen an overhead crane before I arrived at the Arsenal and quickly became fascinated by the monsters which were used to move enormous gun barrels from one huge lathe to another or to trucks for transport to other buildings. The crane was a doubled steel beam that spanned the entire shop area and ran on railroad tracks at a height of 40 feet for the entire length of the building (about 2000 feet). To get to the cab I had to climb a straight steel ladder on the side of one of the support beams and then climb over a couple of steel girders to get to the ladder that went down into the cab. At the age of 18 years it was exciting! At my present age of 80, it would be terrifying!

As with any job that may involve life-threatening decisions, it’s very important that the crane operator and rigger work well together. The rigger is the worker on the floor who connects with cables and ropes, any heavy pieces so they can be safely moved. Because of the noise level at the Navy Yard my rigger and I developed a system of hand signals and became an outstanding team. After working together for six months, my favorite rigger, Salvatore Manduca, was called into the Navy. We waited until the war was over to get married on August 30, 1945.

As servicemen returned from the war, women were happy to return to their traditional jobs of raising children, but were always proud of their ‘Rosie the Riveter” days. My nursing career kept getting postponed as seven babies arrived.

All who took part in the ‘Rosie the Riveter’ jobs in the 1940’s certainly demonstrated the ability of females to successfully step into positions that were previously thought to require male brawn. I like to think that the dedication and enthusiasm that we brought to the work at that time was the beginning of female emancipation. Today, 65 years later, no one is surprised that many women are capable of handling a full time job – from a factory worker to a major business executive, to a nurse, and still be a capable and loving mother, cook and housekeeper.”

Eunice was an avid sailor and horsewoman. Some of her activities included: School committee/Upper Cape Tech, League of Women Voters, Coast Guard Auxiliary, Habitat for Humanity, Sippican Women’s Club and Tobey Hospital Volunteers. In 2002 she was “Marion Woman of the Year.”

In lieu of flowers, may we suggest donations to the Rosie the Riveter Trust or Alzheimer’s Association at 480 Pleasant St., Watertown, MA 02472.

Her visiting hours will be held on Saturday April 7th from 9-11:30 am at the Saunders-Dwyer Mattapoisett Home for Funerals, 50 County Road, Route 6, Mattapoisett. For directions and guestbook, please visit www.saundersdwyer.com. 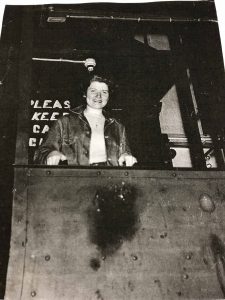 One Response to “Eunice C. (Mullen) ‘Rosie the Riveter’ Manduca”