You are here: Home » News » Zoning Board Denies Appeals

Daniel DaRosa, represented by Attorney John Gushue, came before the Mattapoisett Zoning Board of Appeals on August 20 with two appeals – appeals that asked the board to overturn decisions made by Andy Bobola, the building inspector.

The main issue: DaRosa’s application to build a private pier across an easement. Both appeals were combined, as agreed by all parties, due to the similar nature of the appeals, that being Bobola’s interpretations of building codes and zoning bylaws.

“We believe it’s an erroneous application of bylaws for this pier,” Gushue stated, suggesting that Bobola’s interpretation of the town’s zoning bylaws was an attempt to stop DaRosa’s right to build the accessory structure. “This is a violation of their equal protection rights.” Gushue said, from his reading of the bylaws, there was no provision in them that would restrict the issuance of a building permit.

The bone of contention is whether or not a homeowner can build an accessory structure across an easement; in this case, traversing beach property owned by someone else in order to build a private pier to reach the water.

Bobola wrote a letter in May to the Massachusetts Department of Environmental Protection handling DaRosa’s Chapter 91 Waterways license application, in which he explained that the DaRosa property was not waterfront property and, as such, could not build an accessory structure on an easement they had been granted. Gushue called it an “unprecedented denial.”

But Bobola asked the board to imagine if accessory structures were built all over town on easements; consider the negative impacts they would have on the community and residents’ enjoyment of their property.

Regarding Bobola’s further assertion that DaRosa lacked the appropriate setbacks necessary for building an accessory structure on his own property, Gushue said, “He is just searching for some reason to deny the pier.”

Gushue asked the board members to search their consciences, telling them that they had taken an oath to apply rules equally for all residents.

“You took an oath to render a fair and impartial decision,” said Gushue. “Can you look at yourself in the mirror in the morning?” He continued, “There has been much organized opposition, even in Town Hall.” Gushue provided evidence that another pier had been built in the 1990s and had been constructed across an easement; therefore, DaRosa should be allowed to do so as well.

“So, because of the other pier in 1998, we should permit this one?” asked ZBA member Susan Akin. “We are going to go by current zoning, not 1998.” She emphasized that the DaRosa property was landlocked.

Bobola said, for 31 years, he has striven to apply building codes and zoning bylaws with an even hand, and he took umbrage to Gushue’s comments. He then explained his rationale for the letter to the DEP that was written with the guidance of town counsel, and his refusal to issue a building permit.

“I remain open minded,” Bobola said, concluding his comments. But he noted that DaRosa had not provided complete documents as required when requesting a building permit. It was missing a decision from the Conservation Commission.

That remains an open issue in DaRosa’s proceedings. A decision by the DEP regarding an appeal by the Town and the Conservation Commission to the DEP’s superseding orders is still pending. Gushue advised the board that he had received verbal confirmation that the DEP would render a decision in favor of DaRosa’s application.

Several residents came forward to voice their concern with the proposed construction, again, citing various wetlands issues, recreational use of the waterways where the pier is proposed, and the lack of DaRosa’s direct waterfront access.

Bobola told the members of the ZBA that DaRosa should appeal his denial of a building permit to the state building authorities and not the local zoning board.

Akin closed the public comment segment of the hearing and the board debated the merits of DaRosa’s appeals.

In the end, the board agreed with Bobola that DaRosa’s property was landlocked and, therefore, could not receive a permit to build a pier across an easement. They also agreed that they could not hear the appeal regarding the denial of a building permit, since it was beyond their jurisdiction and it needed to be heard by the state board. Both appeals were unanimously denied.

In other business, the Mattapoisett Congregational Church received a Special Permit to divide a parking lot from a residence in order to have the lot legally associated with the church. Also coming before the ZBA was Neil Lefaivre of Empire Construction, representing Shawn Martin, 5 Henshaw Road, with a request for a Special Permit to build an addition to an existing residence. The permit was approved. 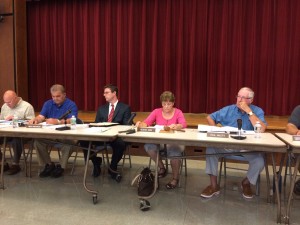