Members of the Marion First Congregational Church didn’t like Christian Loranger’s initial design for the five-unit condominium complex he is building next door, even though Loranger’s plan complied with the Town’s Zoning Bylaws and a building permit was issued.

Some church members, represented by Bill Saltonstall, filed an appeal with the Marion Zoning Board of Appeals back in May to overturn the building permit for the project. During the public hearing for the appeal on June 25, attorney Patricia McArdle argued that the church had no standing to file an appeal and the building permit Building Inspector Scott Shippey issued Loranger was legal and legit. The board took the matter under advisement and then finally voted to deny the appeal on July 23.

However, July 23 was also a public hearing for an amendment to the design of the condominium complex slated for 16 Cottage Street – one that Loranger and his attorney, John Mathieu, said was created to satisfy the church members’ concerns and to build a condominium that was more palatable to them. This new plan required approval from the ZBA, as the plan does not conform to the Zoning Bylaws.

Loranger, owner/agent of Sippican Preservation, LLC, now needs two parking waivers to move forward: one to waive the requirement for two spaces per unit, and the other to allow parking spaces in front of the building.

“We’re here tonight, after a lot of negotiations with the neighbors,” said Mathieu, “to … see if the board would approve the amended plan … to address everyone’s concerns.”

According to Mathieu, the neighbors reviewed the new plan and were in agreement with the schematics. The neighbors also influenced Loranger’s landscaping plan to add a row of shrubs for screening.

“We’ve done all that we can do to address their concerns,” said Mathieu.

When ZBA member Bob Alves asked where the additional parking spaces would be located, Mathieu said they were looking toward street parking around the property. Alves cringed.

ZBA member Betsy Dunn suggested that parking issues are usually within the purview of the Planning Board. Dunn also had her own concerns over the footprint of the building, specifically the basement, which is currently not livable space in the current structure that exists on the lot. She argued that it was not livable space and is not taxed. Shippey corrected her, assuring her that the basement space will be assessed as taxable square-footage.

Saltonstall referred to a letter written by Margie Baldwin on June 20 expressing concern over the plan and the church neighbors’ willingness to work with Loranger on a plan they personally would approve of. He stated for the record that the neighbors all approve of the amended plan.

“It’s a better plan, and we feel that the roof configuration, the entrance, the parking situation, and the elevations of this building are generally improved,” said Saltonstall.

Abutter Christy Dube said she supported the amended plan, but was not in favor of two balconies that would overlook her backyard.

“The two decks that would allow neighbors to look into my backyard,” said Dube. “I’m not supportive of that one element…. As the direct abutter, I think my family has the most to live through.”

Loranger said he would work with Dube regarding her concern, adding that Dube is married to his first cousin.

“I would respectfully ask, if there is any way you could do the ruling on the parking, I’d ask you to.…” said Loranger.

The public hearing was closed and the matter was taken under advisement for a decision at a later meeting.

Before adjourning, the board voted to deny the church’s appeal of the building permit for Loranger’s previous plan, with four in favor and one abstention: Dunn.

In a follow-up interview, when asked why she abstained, Dunn refused to comment.

When asked if it was because she was a member of the Marion First Congregational Church, the appellant for the abutting condo complex, Dunn again declined to comment. She eventually disclosed that she is a member.

During a follow-up phone call, ZBA Chairman Eric Pierce said Dunn’s membership in the church had come up relative to the appeal hearing, but he did not advise her to disclose it.

“It’s not up to me to make her [make the disclosure],” said Pierce. “She has to step up and say I’m a member of the church.”

Pierce said he is glad Dunn abstained from voting on the matter, even though he acknowledged the church had no standing for an appeal because they wouldn’t suffer any damages.

“We’re a small town and we often have this person (board member) say, ‘I know this person and we have this relationship,’” said Pierce. “And people either not vote or not discuss.”

Pierce said he did not have a good answer for why Dunn would initially hide her church membership when questioned after the meeting.

The Wanderer learned Dunn was at one time the treasurer for the First Congregational Church of Marion, and on July 28 The Wanderer called the church and asked for a list of the church officers to confirm that she is no longer the treasurer, but was refused.

“We don’t share that kind of information with a newspaper,” the secretary stated. After, she confirmed that Dunn is no longer the treasurer, saying Ben Dunham was the current treasurer.

On July 28, The Wanderer also discovered that newbie to the ZBA, member Joanna Wheeler, a non-voting associate member, is the church clerk at the Marion First Congregational Church. Wheeler could not be reached for comment on July 28, and the chairman did not respond to a voicemail on July 28.

The next meeting of the Marion Zoning Board of Appeals is scheduled for August 13 at 7:30 pm at the Marion Town House. 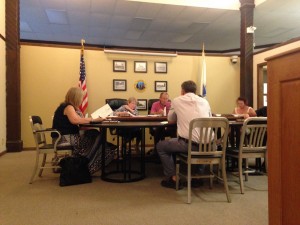