You are here: Home » News » ZBA: ‘Common Sense Over Bureaucracy’

The Marion Planning Board majority wanted the building permit for the Briggs’ solar farm on County Road revoked so the board could conduct a site plan review of the project it claims it is entitled to. But on January 22, the Marion Zoning Board of Appeals decided it would uphold the building permit, citing “common sense over bureaucracy.”

ZBA Chairman Eric Peirce acknowledged Planning Board member Robert Lane’s argument that Chapter 9 of the Zoning Bylaws requires a site plan review was “really well put together.” Lane emphasized that the Planning Board did not seek to thwart the project any further, but to simply avoid setting a dangerous precedent for future projects similar in nature.

Lane and fellow board members Chairman Stephen Kokkins and Rico Ferrari, both in attendance, maintained that the building permit should be revoked until the Planning Board exercised its right to a site plan review. Lane cited various reasons such as ambiguity in the bylaws relative to the definition of “structure” and “gross floor area,” as well as the part of Section 9 that mentions triggering a site plan review before the Planning Board.

“I’m sure the entire Planning Board would expedite any sort of approval,” said Lane, “… and a precedent would be placed.”

Peirce said the ZBA has to be especially careful to stay away from establishing any sort of precedent, and the board looks at each application on a case-by-case basis, saying otherwise the board would face a slippery slope.

Dale and Laura Briggs sat quietly and made no comments when invited to speak.

Building Commissioner Scott Shippey, who issued the building permit subsequent to the ZBA granting the variance, also declined comment, but later told the board he had “broad shoulders” and could handle it should the board not uphold the permit.

After the public hearing was closed and Planning Board members left, Peirce told Shippey, “You were doing what we told you to do.”

With all due respect, stated Peirce, “We’ve seen [the project before us] so many times we respectively have done the site plan review.”

“Are they aggrieved?” asked Peirce. “Other than philosophically, they aren’t pained.”

Although the Planning Board could virtually streamline the site plan review approval process and follow “the letter of the law,” Peirce said he felt the intent of the bylaw was more important in this case.

“My opinion is not to overturn the building inspector,” said Peirce. “I don’t think we’re doing the Town a disservice.” He added that the ZBA does not make a practice of “competing with other boards.”

“And I don’t intend to,” said Peirce. “But there’s common sense, and there’s bureaucracy.”

The ZBA will wait to take a formal vote until its next meeting, but the board voiced its support for upholding the building permit. Peirce said he would run the issue by town counsel before taking action.

“It’s meant with no disrespect, but let’s move on,” Peirce said.

Also during the meeting, the board approved the special permit application for Jon Delli Priscoli of 91 Water Street to build an addition onto the historic cottage.

The next meeting of the Marion Zoning Board of Appeals is scheduled for February 26 at 7:30 pm at the Marion Town House. 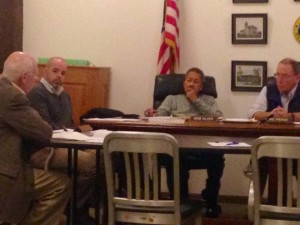