The Planning Board unanimously granted RGS Energy, the firm responsible for the solar site at 33 North Avenue in Rochester, permission to work on two Sundays in late September due to a shipping delay.

According to Jim Mellors, the site superintendent, there has been a delay in the shipping of 10,000 solar modules. He said that there are already 6,000 solar panels installed on the property.

“We would like to possibly work on two Sundays,” Mellors said. “Just in case I need the two Sundays, I’m looking for permission to do that.”

Mellors said that all of the work to be done is quiet work, and that it shouldn’t disturb any neighbors. The Planning Board stated that the earliest start time should be 9:00 am so as not to disturb those neighbors.

“There will be no heavy machinery at all,” Mellors said. “It’s basically all quiet work.”

Mellors added that the crew that day would number from 15 to 20 workers, and that all of the work will take place on the other side of the berm that lines the street.

“It wouldn’t be too inconvenient, in my opinion, to the neighbors,” said Michael Murphy of the Planning Board. “It’s all hand tools, so you’re not going to make any noise.”

“I personally don’t have a problem with that,” said Arnold Johnson, the Chairman of the Planning Board.

In other news, the Planning Board approved a lot release for lot 12 on 116 Ryder Road after a mistake was found that indicated the subdivision had only four separate properties rather than five. There is currently a home on the lot in question, and it is currently being sold.

“[In 2006] we signed off on a subdivision, but apparently there was a mistake made,” said Johnson. “Now, apparently, there’s some activity in there, and the house is in the process of being sold.”

“We’ll be sending legal action to approve,” said Gary Florindo of the Board. 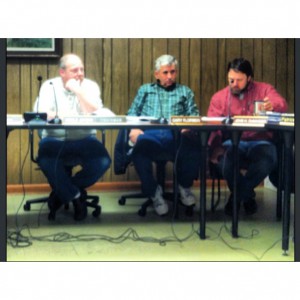