After a hearing continuation, applicant Greg Downey received approval from the Mattapoisett Conservation Commission on Monday, March 26 for a Notice of Intent to construct a new home at Whaler’s Way.

The commission had continued the hearing two weeks ago because the applicant had furnished updated plans with required revisions at the beginning of that meeting, without adequate time for review. The commission had requested time to look over the changes, which included corrected pipe measurements and drainage calculations.

On Monday night, the Commission voted in favor the Downey’s plans, pending an order of standard conditions.

In another matter, the Commission continued the hearing for the Goulart Family’s plans to build a single-family house on Little Pine Way. Commission member Bob Rogers was concerned about the potential amplification of local flooding due to the high grade of the land and the fact that they also call for the filling in of a flood storage area, with no indication to provide compensatory flood storage on the property.

Patricia Tapper, an abutting resident, was also worried about the possible flooding of a small stream that runs through the neighborhood, which is classified as an intermittent or perennial stream, depending on location.

“I can remember that brook has always flooded, unless there was a drought,” she said. The hearing was continued so that the elevation of the area in question could be included on the plans.

In other business, the Commission voted to approve plans to reconfigure the floats and piles at Short Wharf, on Water Street. They also voted to extend the existing Order of Resource Determination Area for property on Brandt Island Road, and approved the Request for Determination of Applicability regarding a septic system upgrade at 4 and 4R Avenue A. A Notice on Intent filed by Christine Gibbons for underground utilities at 37 Water Street also was approved without incident.

The next meeting of the Mattapoisett Conservation Commission will be on 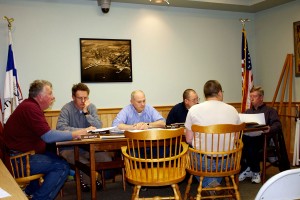