The Mattapoisett Conservation Commission on February 23 discussed concerns brought by the Buzzards Bay Coalition and Buzzards Bay National Estuary Program regarding a subdivision on Seabreeze Lane next to the Reservation Golf Club.

At the previous ConCom meeting, Chairman Bob Rogers read into the minutes a letter from the BBC and an email from the BBNEP regarding possible encroachments into the 75-foot no-touch buffer zone that skirts three residential lots at this location.

As evidence that the homeowners had violated the deeded restricted wetlands area, aerial images were presented. It appeared that since the subdivision was first permitted 15 years ago, removal of natural vegetation and cultivation of groomed lawns had taken place within the protected bordering wetlands.

Representing two of the three homeowners who were invited by the commission to discuss the possible violations was Brandon Faneuf, principal scientist from Ecosystem Solutions.

On behalf of Lisa Craig of 4 Seabreeze Lane, and John and Cheryl Anzaldi of 3 Seabreeze Lane, Faneuf laid before the commission their plans for investigating the violation claims.

Another resident of the development, Valeria Murolo of 2 Seabreeze Lane, said she was confused by the notice she received to attend the meeting and needed more information.

To begin the process, Faneuf said his clients would be engaging Schneider Engineering to draw a site plan and wetlands delineation reflecting the properties’ current status. He said that given the season they were looking at a spring investigatory period returning with their report sometime in April. Based on those results Faneuf suggested that his clients’ landscaping activities would be found acceptable and further, that wetlands restrictions on the property did not exist.

“What I’m hoping is that people will be willing to do the right thing, come up with a remediation plan,” said Rogers. “I’m not pointing fingers; this is not a blame game.”

He said that historic wetlands delineations would be used to determine if violations had taken place, adding that current wetlands boundaries would not be acceptable. On that point, the commission members were unified.

Faneuf then dug in a bit deeper on the issue of deed restrictions stating.

“From my clients’ point of view, conservation restrictions don’t exist,” said Faneuf. He said that restrictions, which the original developer agreed to and were to have been memorialized via deed restrictions, had never been registered with the county.

Rogers was quick to point out however, “…but those restrictions are part of the order of conditions.”

Faneuf then pointed to the fact that the Town does not have separate and enforceable wetlands bylaws. That being the case, he believed that allowed his clients to file a new Notice of Intent. He said that if the commission denied the NOI, his clients would appeal to the DEP who he said “most likely will side with the homeowners.”

“This commission hasn’t taken any action, but infractions have occurred,” said Rogers.

Korrin Petersen, senior attorney for BBC, added, “In 2000, the Conservation Commission conditions were put in place to protect Eel Pond … the coalition supports the commission’s efforts in trying to get compliance.”

“If anyone needs to plant a tree or move a shed, that is what we are trying to determine,” Rogers told Faneuf and the homeowners in attendance. “We’ll talk to town counsel; we’ll keep this on the agenda.”

Rogers said that he was a Planning Board member when the Seabreeze subdivision, which he called a “controversial plan,” was under development.

“If [someone] was entitled to build a subdivision,” said Rogers, then that was within their rights. He felt however, “People have expanded beyond where they were supposed to … when you come into it with open eyes, it’s disappointing 15 years later to be negotiating.”

He concluded, “Shame on us if we don’t try to enforce the prior order of conditions.”

The matter was continued.

Later in the evening, Rogers broached the subject of developing a wetlands bylaw. He had previously asked the commission members to review a draft document based on one that Freetown currently has in place. That document may be viewed at www.mattapoisett.net (scroll down the homepage to Town News).

“I want the commission to offer opinions,” said Rogers. He said once he received their input, he would sit down with Town Administrator Michael Gagne and see if the Town was interested in pursuing wetlands bylaws. If all that came to pass, then public hearings would be held in advance of Town Meeting.

“I don’t think I should be on the town meeting floor debating this,” Rogers said.

Commission member Tom Copps said, “It’s not clear to me that it’s compelling” referring to the draft document. His expressed concern was that the draft document wasn’t clear about how outside consultants would be compensated when their services were used. He felt that Mass General Laws Chapter 44, Section 53G covered such situations. He also stated, “I’m not sold on whether or not we need a bylaw.”

Rogers added clarity to his request by saying, “It was brought up again tonight that we don’t have a bylaw.” But he said, “If three of five (commission members) don’t want one, I’m not going to swim upstream – I’ll focus my energy elsewhere.”

In other business, Carol Kolek of 112 Acushnet Road, represented by Engineer Rick Charon, received a Negative 3 determination for the installation of a new septic system. 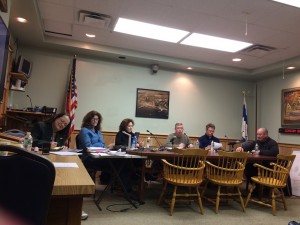