On January 20, the Mattapoisett Water and Sewer Commissioners met with AECOM, an international architectural and engineering firm that provides turnkey infra-structure solutions to a variety of industries as well as municipalities. They were employed by the Town to provide research and propose solutions for several high-profile water and sewer projects.

Doug DeNatale of AECOM has been working with Water and Sewer Superintendent Nick Nicholson for a number of years with a focused effort over the past three years on an old, unused well known as ‘Pump Station 2.’

This location began pumping water for the Town in 1925, but it had been abandoned. Nicholson and DeNatale both believe that it could be a viable fresh water source for the Town and at a cost far less than sourcing new wells or buying water from other towns.

DeNatale told the commissioners that the yield study demonstrated a flow of 400,000 gallons per day. That figure represents half of what the state now permits Mattapoisett to pump daily. This source could, if needed, supply a substantial amount of potable water to the Town’s residents.

The quality of the water was also deemed of such a high quality it would not have to be treated before being introduced into the system, DeNatale stated. Pump Station 2 was also cleared by Massachusetts Environmental Policy Act as having no environmental impact or threat to habitat.

Nicholson noted that re-introduction of this well into the system has been 15 years in the making.

“We don’t ever want to lose a water source.” Nicholson said that this will be a back-up should another well go down.

The next step for Nicholson and AECOM is securing a water management permit from the state. AECOM’s full report has been sent on to the Department of Environmental Protection and MEPA for their seal of approval, although MEPA’s November 2014 report and DEP’s January 9 letter both indicate acceptance of the well into the system.

Funding of the project to restore Pump Station 2 will have to be accepted by the voters at Town Meeting in the spring, Nicholson confirmed.

Before it can go to the voters, Nicholson said that costs associated with the well will need to be part of the capital planning process.

“It will never get less expensive than now,” Nicholson said, further noting that monies would have to be borrowed to foot the bill. No cost estimates were discussed.

AECOM was also in attendance to present their outline for the replacement of the water main on Mechanic Street. A late winter bid cycle is planned so that firm figures can be presented at Town Meeting in May.

And the third project AECOM’s team has been researching for the Town is repair options for water mains on Route 6 to Aucoot Road.

These ancient, cast iron pipes have caused many problems over the years, not only for the Water and Sewer Department (“…many a cold late night call…,”Nicholson said), but also in service disruptions.

The six-inch pipes in question cover a 4,000-foot distance. Steve DeFrancesco of AECOM said the most cost effective option is to line the old pipes versus digging them up and replacing them. Rehabilitation of existing public water supply system pipes was described as the most viable option.

Such a project would be done during the warm weather months. DeFrancesco suggested a possible March bid date. He also said that the Massachusetts Highway Department design approval and permitting processes would take approximately a month. Although not necessary due to the non-jurisdictional location of the proposed work, DeFrancesco said AECOM would send a letter to the Mattapoisett Conservation Commission so they are aware of the work before it begins.

Earlier in the evening, Nicholson asked the commissioners to review and support the completed new Open Space Plan saying, “…this is a good step forward for the Town.”

The draft document has taken just over a year to complete and runs many hundreds of pages. The commissioners’ support was needed before the document could be forwarded to the State for final approval.

The next meeting of the Mattapoisett Water and Sewer Commission is scheduled for February 3 at 6:00 pm at 19 County Road. 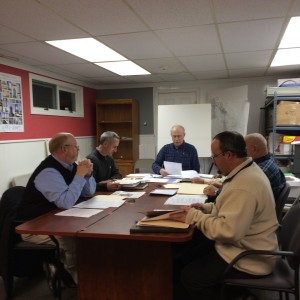