On September 22, the Mattapoisett Board of Selectmen meeting was dominated by discussions around the importance of giving residents safe streets in terms of walkability, cycling, and signage.

Bonne DeSousa met with the selectmen to discuss a wide range of items including the success Mattapoisett had in being awarded as winners of the Southcoast Bikeway Challenge and the need for additional funds that would allow the town to begin the permitting phase for the continuation of the bike path through the YMCA property.

The award, DeSousa said, included the participation of 33 riders from Mattapoisett who clocked in an amazing 22,010 miles, beating Fairhaven who was last year’s winner.

Of a $34,000 funding shortfall in the next phase of the bike path process, DeSousa said that the Friends of the Mattapoisett Bike Path had launched a crowdfunding effort. Later in the evening after DeSousa had left the meeting, Selectman Jordan Collyer asked about the possibility of the town matching funds collected in this latest funding activity. The board took that under advisement with Selectman Paul Silva noting that, with so much invested at this point, the town couldn’t let the permitting phase slip away.

DeSousa then told the board that a meeting of the Municipal Bike and Pedestrian Plan group sponsored by the Massachusetts Department of Transportation would be held on October 8 at 6:30 pm at Center School.

“It’s important for towns to have a plan because there is a 50 million dollar pot of money for grants,” said DeSousa.

The meeting will allow residents to air a wide range of concerns including the conditions of roadways for walking and biking.

Both Selectmen Tyler Macallister and Collyer asked if something could be done about signage at the bike path crossings at Brandt Point Road and Mattapoisett Neck Road due to cyclists darting into oncoming traffic.

DeSousa said engineers who designed the bike path have placed signage in specific locations and she could not move or alter those. However, she suggested partnering with the Mattapoisett Recreation Department to provide safe cycling classes for children. The board agreed to this and also in working with the schools.

She also asked the board to support the inclusion of Mattapoisett’s bike path as part of the Eastcoast Greenway and the installation of an all-weather bulletin board that had been donated by St. Gabriel’s Church in Marion. The board agreed to both of these requests.

Coming before the board from the Buzzards Bay Coalition were Allen Decker and Brendan Arnett seeking the board’s support in filing for grant monies to purchase 114 acres of land in the Mattapoisett River Valley from the Tinkham family. The purchase price is $628,000. Arnett said the state grant would pay for one half, and with the assistance of the town, other funding sources including the town’s Community Preservation monies would be sought.

Silva wondered why the coalition wasn’t seeking funds from Fairhaven as well, given their vested interested in protecting the water supply that also services their residents. Allen and Arnett agreed to that possibility, noting that every avenue for funding would be explored. The board agreed to complete the necessary state grant application to get the funding effort in motion.

Town Administrator Michael Gagne updated the selectmen on several projects, including the town’s effort to get the state to improve and approve new crossing lights along Route 6. Gagne said flashing lights would be installed at the high school and Pearl Street. He is awaiting certification from the state to move forward.

Gagne also updated the board on the status of the Acushnet Road repairs. He said utility work and tree removal had begun. A group meeting with residents had produced positive results as the residents heard the work is planned for completion by mid-November.

In dates to remember and other news, the Fall Special Town Meeting is scheduled for November 9 at 6:30 pm at the ORRHS auditorium.

Winter farmers’ markets will begin at the ORRJHS beginning October 24 through April 23 every second and fourth Saturday from 10:00 am to 1:00 pm.

Flu vaccinations will be available to residents 60 years and older at the Council on Aging on Thursday, October 8 between 8:00 am and noon; a $5 donation or non-perishable food item is suggested.

Household hazardous waste day is scheduled for September 26 from 9:00 am to noon at the Highway Department located at 200 Ryder Road. This collection is only for Rochester and Mattapoisett residents. The cost is $30 for up to ten pounds of material and $50 for material up to 25 pounds. 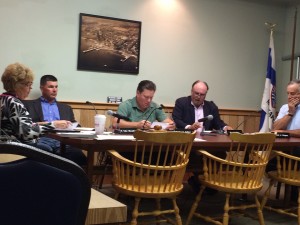