Marion Special Fall Town Meeting voters on October 26 finally accepted a new ambulance, but they flat out rejected the Board of Selectmen’s article to appropriate $50,000 to match a potential grant of $200,000 that could have led to expanded municipal sewer service to the Indian and Aucoot Cove area neighborhoods of Marion and Mattapoisett – something neither the voters nor one vocal Indian Cove resident wanted.

Town Administrator Paul Dawson and the selectmen over the past several weeks had expressed their optimism over the funding opportunity offered by the Buzzards Bay and Narragansett Bay Estuary Programs, which Dawson and selectmen were hoping would lead to an eventual nitrogen load decrease that the EPA, the entity that holds the fate of the town’s wastewater treatment in its hands, would look favorably upon.

Selectmen Chairman Stephen Cushing introduced Article S4, explaining that the town would partner with Mattapoisett to provide sewer service to the Aucoot Cove Mattapoisett residents as well as Marion residents – an opportunity for Marion to increase its sewer service revenue while decreasing nitrogen pollution in the cove.

The Buzzards Bay Coalition supported the proposal and grant opportunity, and the Town of Mattapoisett would have contributed $10,000 towards the feasibility study – an amount that some Marion Town Meeting voters found unsubstantial.

Resident Joseph Zora reminded voters present of the looming NPDES (National Pollutant Discharge Elimination System) permit the EPA will issue any day now, which could cost the town tens of thousands of dollars should the EPA enforce its strict new standards for wastewater treatment. He wondered how adding more residents to sewer service, despite a moratorium on the addition of sewer hookups, would benefit the town, given the NPDES circumstances.

Referring to the impending NPDES permit, Zora told voters: “If you’re not frightened then you should be … when the EPA comes.” Because, when it comes to a potential $25 million in wastewater treatment plant upgrades, “This is going to kill us.” As for the support of the BBC, Zora said, “I’m a little bit leery of the ‘buzzards’ because they keep picking our bones.”

Dawson defended the article to no avail. Finance Committee Chairman Alan Minard gave no recommendation on the matter, saying he did not receive the information he needed in time to make an educated decision.

Former Planning Board member Stephen Kokkins rejected the proposal as well, arguing that adding new households to the current sewer system would do nothing to decrease nitrogen pollution, despite the elimination of private septic systems, because the town’s current wastewater treatment plant is already operating in excess of its capacity.

“I think this proposal is premature,” Kokkins said.

A resident made the motion to table the article, and the voters unanimously supported it.

The ambulance article, which was passed over during the Annual Town Meeting so that specifications on the vehicle could be reviewed by the new incoming fire chief, passed with little objection from voters and no objection from FinCom this time.

Selectman Jody Dickerson pointed out that the timing of the purchase was perfect, given new federal standards for ambulances that would take effect July 1, 2016 and cost an additional estimated $40,000.

“We are confident that this ambulance is not only suitable … but adds flexibility,” said Finance Committee Chairman Alan Minard. “All in all, I think it’s a reasonable, although very expensive, piece of equipment.”

With the approval, $150,000 of the appropriated total sum of $241,000 will be transferred from the capital stabilization fund and the remainder from free cash.

Approval for Article S2 to appropriate $10,000 to undertake aerial spraying to combat winter and gypsy moths passed with a slightly lesser margin after a couple of residents voiced their discontentment over the limited scope of the spraying – only a few major public ways and throughout Marion village.

“I pay taxes in this town,” said Wareham Road resident BJ Barrows, who wanted Route 6 to be part of the spraying. “Why don’t you ask for more money and do the whole town?”

Tree Committee Chairman Margie Baldwin said Route 6 was a state highway, not under the jurisdiction of the town, which Barrows said he could not accept.

Another resident said she lives on a private road and also pays taxes and would want the spraying extended to private ways as well. Baldwin agreed it would be nice, but “We can’t do all the roads in town.”

The vote passed; however, there was a significant number of ‘nays.’

Town Meeting voters approved Article S1 to allow the town to collect water bills from area town residents to whom the Town of Marion provides water, including the right to issue liens on the properties as if they were Marion properties should water bills go unpaid.

Article S5, to appropriate $12,006.19 to cover damages caused by a significant rainstorm was passed over at the request of the selectmen. Selectmen knew they would pass it over if the insurance company responded favorably toward covering the costs of the damages. 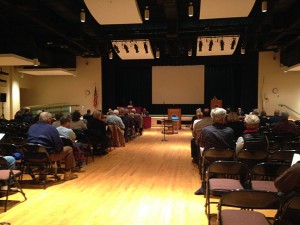