You are here: Home » News » Uncertainty Over FEMA Flood Plain

Board members on April 22 voted to continue the public hearing to discuss an amendment to a section of the Town Flood Plain District By-Law pertaining to the process of granting special permits for proposed work within a flood zone.

Board member Ben Bailey has maintained that the new FEMA flood maps are arbitrary and incorrect, with his own property adversely affected by the new maps that now show the “blue line” running right through his house.

The problem is, Planning Board members are torn over whether to recommend the amendment to Town Meeting, to not recommend it, or recommend tabling the amendment, while trying to assess any ramifications from each of the options.

Bailey flat-out opposes adopting the amendment until the FEMA maps are certifiably correct, a process that appears complicated, and maybe even futile from where the board sits now.

Recent correspondence between the board and state officials have resulted in email exchanges Bailey deemed threatening, saying he interprets it as, “’If you don’t do what we tell you to do, then we’re going to punish you,’” stated Bailey referring to the email.

Board member Susan Teal wanted clarification, asking if adopting the bylaw meant adopting the FEMA map, even if the board knew there were inaccuracies.

“I’m not a hundred-percent up on this,” stated Chairman Arnold Johnson, despite having previously met with town counsel.

“My concern was, are there other ramifications than just…?” said Johnson trailing off. He used the analogy of a farmer eradicating a pest from the field, only to be replaced by another pest to express his concern.

One major issue is that, without a by-law with language pertaining to granting special permits to properties within the flood plain, no permits could be granted at all. Period.

Board member John DeMaggio said he viewed the email correspondence as threatening, even if the state did have fact on their side.

But how does the Town go about getting the maps corrected?

“They can’t just take my word that it isn’t right,” said Bailey. He was irritated by the prospect of having to have his property elevation surveyed at a cost of roughly $1,000 in order to document the actual elevation. “They only way [the State will accept the corrections] is if FEMA blesses it,” said Bailey. Bailey stated that the FEMA maps now show the wetlands on his property to be 40 feet to the east of where they actually are.

But the inaccurate FEMA maps have already been accepted by Town Meeting, so what would the adoption of the Flood Plain District By-Law really mean in the scope of things?

The board could consider rescinding the 2012 vote to adopt the maps, or seek guidance from the Southeastern Regional Planning & Economic Development District (SRPEDD) on where to go from here.

The board voted to continue the public hearing to discuss the by-law amendment until May 13, so Conservation Agent Laurell Farinon could attend and provide further information, as well as Town Counsel Blair Bailey. The board also asked Town Planner Mary Crain to ask a representative from SRPEDD to attend and advise the Town on how to go about correcting the FEMA maps.

Not adopting the flood plain by-law could result in Rochester being suspended from the program, and FEMA’s inaction if Rochester were to suffer a catastrophic disaster in the future.

“As a town,” said Johnson, “we should see that the FEMA map gets amended properly and done.”

Also during the meeting, the board reorganized and reappointed Johnson as Chairman, Gary Florindo as vice-chairman, DeMaggio as clerk, and          Teal as associate clerk.

Hearings to rescind the Form C Subdivision Approval and Approval Not Required Application for Harris Real Estate Boston, LLC of King’s Highway was continued until May 13 at the applicant’s request. 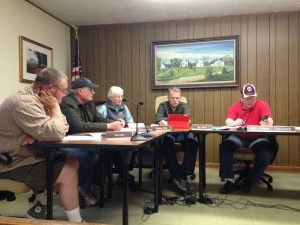