You are here: Home » News » Trial and Error Lead to Bylaw Amendments

Amending the Limited Commercial District zoning bylaws won’t protect the town from any perceived negative impacts of the large-scale solar installation proposed for the historic center, but as Planning Board Chairman Arnold Johnson pointed out on November 24, better safe than sorry – better too late than never.

The Planning Board had recently forwarded three draft zoning bylaw amendments – two pertaining to solar farms within the Limited Commercial District – to the Board of Selectmen to approve the language, which they did the previous night and which they then sent back to the Planning Board to hold a public hearing.

The first amended bylaw pertains to the perimeter vegetative boundary of projects proposed within the Limited Commercial District. New language, which was once proposed for the bylaw earlier in the year but then removed, was inserted to require a wall or fence for screening of no fewer than 6 feet in height. The bylaw currently only requires the presence of four-season evergreens for screening. Johnson said applicants could request a waiver from this wall/fence requirement for smaller-scale, simpler projects.

“It probably would have saved us a little bit of aggravation if that had been in there,” said Johnson, relative to the proposed solar energy installation. “Even if we put it back, it’s not gonna help us with that one.”

The second bylaw pertaining to large-scale solar installations adds language under landscaping to minimize the number of removed trees of a 12-inch caliber or greater. While crafting the original bylaw, Johnson said, the subcommittee figured it was senseless to address this and make the applicant flag all 12-inch caliber trees on the site when the majority of trees would be clear-cut to accommodate the solar arrays anyway.

“However,” said Johnson, “going through our first one (solar installation) under our solar bylaw … something like this might help us – maintaining a vegetative perimeter boundary.”

Although trees in the middle of the site would be removed, Johnson said this bylaw could have protected more of the trees along the perimeter.

The third bylaw pertains to signage, and simplifies sign regulations by compiling them all into one concise location.

The board voted to accept the language of all three bylaws and voted to recommend adoption at the next Town Meeting.

Also during the meeting, the board opened and closed the site plan review public hearing for the installation of four co-location wireless communications antennas on the existing monopole cellular tower off Cranberry Highway, filed by Bell Atlantic Mobile.

The board granted several waivers requested by Verizon representative Victor Manougian, and asked minimal question on the project that Johnson called “pretty benign.”

The project also includes a pre-fabricated 11 foot 6 inch by 26 foot equipment shelter and the extension of a chain link fence.

The board will draft a decision and vote on the project at the next meeting.

The next scheduled meeting of the Rochester Planning Board will be December 8 at 6:30 pm at the Rochester Senior Center located on Dexter Lane. 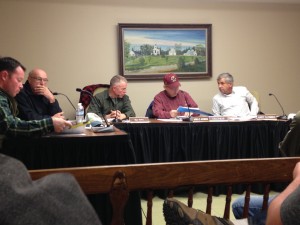