Five Marion residents, nine Mattapoisett residents, and seven Rochester residents raised $86,950 of the $35 million donated by the Pan-Massachusetts Challenge (PMC) to Dana-Farber Cancer Institute through its Jimmy Fund. They were among 5,169 cyclists who rode up to 190 miles across Massachusetts to raise money for cancer research and treatment. The 2011 fundraising total is $2 million, or 5.7 percent, more than the PMC gave in 2010 and brings its 32-year Jimmy Fund contribution to $338 million.

The PMC is the most successful athletic fundraising event in the nation. It raises and contributes more money to charity than any other. In August, cyclists from eight countries and 37 states rode one of 11 routes that ranged from 25 to 190 miles. Riders included seven-time Tour de France winner Lance Armstrong, Massachusetts Senators John Kerry and Scott Brown, 350 cancer survivors, and avid cyclists and weekend warriors alike. Many rode in support of loved ones being treated for cancer or in memory of those who have been lost to the disease.

The contribution represents 100 percent of every rider-raised dollar, a charity pass-through rate that is nearly unparalleled within the athletic fundraising event industry. Approximately 3,100 volunteers and 200 companies supplying almost $5 million in products and services provided riders with food, mechanical and medical assistance, luggage transport and support of all kinds.

The 2011, PMC exceeded its own fundraising goal of $34 million by $1 million. “PMC riders are committed to the cause and to this event,” said Billy Starr, PMC founder and executive director. “Their dedication to raising money for cancer research is unparalleled in the fundraising industry.”

The check was presented to Dana-Farber President Edward J. Benz, Jr., MD, at a Fenway Park celebration which was attended by more than 600 PMC cyclists and volunteers. “PMC money is seed money that enables our scientists to conduct the earliest forms of research,” Benz said. “The money they raise is critical to our work. It enables us to invest in major new patient care and research initiatives that could otherwise go unfunded.”

Founded in 1980 when 36 cyclists rode across Massachusetts and raised $10,200 for the Jimmy Fund, the PMC is known today as the “gold standard” of athletic fundraising events due to the unprecedented sums it raises and its consistently efficient charity pass-through rate. One of the very first athletic fundraising events in the nation, the PMC was a pioneer in the way it focused on raising money for charity.

The 33rd annual PMC is set for Aug. 4 and 5, 2012. Registration opens online on Jan. 10 for PMC alumni and Jan. 17 for newcomers. For more information about the PMC, which is presented by the Boston Red Sox Foundation and New Balance, visit www.pmc.org. 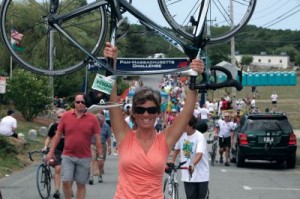