You are here: Home » News » Tri-Town Prepares For Hurricane Sandy

As Hurricane Sandy barrels its way past Cuba and toward the east coast of the United States, people everywhere from Florida to Maine are preparing for the worst.  Forecasters are calling for the hurricane to mix with a cold front from Canada and an outgoing storm system.  The combination of the three weather fronts could have a focused impact around New Jersey and lower New York, but high winds and storm surges are expected for the majority of the coastal regions of the upper eastern seaboard.

On Friday, October 26, the Marion Board of Selectmen held an emergency meeting to appoint an emergency municipal liaison to coordinate relief efforts should the hurricane pose a threat to the area.  The Board appointed Selectman Jonathan Dickerson to the position.

“The need for this was to identify a Selectman to be available in case we have to make some sort of storm declaration,” said Chairman Stephen Cushing.

In the event of a violent storm, Dickerson would be required to declare a state of emergency for the town.  He would also be authorized to release emergency funding for municipal purposes and would be in charge of coordinating communication with utility companies and external emergency services, if required.

The meeting was slated for Monday but bumped up to Friday once the path of the storm changed, suggesting an earlier landfall than first predicted.

“At this point in time, it appears the storm is going to take a track up the Atlantic and the early computer models that shown it going out to sea and been eliminated.  It is almost certain that it will make landfall somewhere on the east coast,” said Paul Dawson, Town Administrator.

The area could expect to see storm surges from two to six feet, with possible sustained winds of 100 miles per hour.  The severity of the potential storm surge will also depend on the level of the tides.

On Friday morning, the Town of Mattapoisett held an emergency meeting of the department heads to discuss a readiness plan.  The Town of Rochester will determine on Saturday whether or not the emergency preparedness committee will meet. 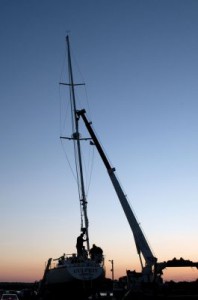