You are here: Home » News » Tri-Town Cleans Up After Sandy

Some said it was to rival Hurricane Bob, the storm that devastated New England in 1991.  The “perfect storm” comprised of Hurricane Sandy and two other weather systems made landfall around New Jersey last night, but the South Coast felt the approach hours before.  Sustained winds of over 35 miles per hour raged across the coastline from Rhode Island to the Cape all day, but eventually faded away around midnight.

While the Mid-Atlantic states have seen everything from heavy snow, rain, wind, and major flooding, the Tri-Town emerged from the storm relatively unscathed.

“Things are looking up.  We had some sand washing up on the road near the town beach,” said Mary Lyons, Chief of Police in Mattapoisett.  “We still have some power outages.”  According to the NSTAR website, there were 813 customers in Mattapoisett without power before noon on Tuesday.

What could have become a catastrophe ultimately ended up as an inconvenience.  Schools and town halls were closed.  Flood warnings were declared.  Some areas of the South Coast were even evacuated on Monday afternoon.

Luckily, damage was limited to fallen branches and small to medium-sized debris along roadways.  No towns reported any major fires or medical emergencies during the storm.  Since the storm began to wane, emergency crews have been hard at work addressing problem areas.

“Roland Cote, the Tree Warden, along with two contract crews, are out working on dealing with wind damaged trees and their removal. Clean-up at the town pier, town landing, town beach, Ned’s Point will proceed after tree work and road obstruction removal,” said Michael Gagne, the Mattapoisett Town Administrator.

“We had downed wires and trees all over town.  There doesn’t seem to be any neighborhood hit more hard than another.  As we speak this morning, clean up operations are underway,” said Marion Town Administrator Paul Dawson.  He reported that the town measured a 67-mile per hour gust of wind on Monday.  “This could have been a devastating storm.”

Meteorologists were predicting wind gusts of over 80-miles per hour and a storm surge of almost 10 feet for many lower areas around the South Coast.  While the full moon increased the high-tide level overall, flooding related to the storm surge was minimal.

The amount of damage may be less than anticipated, as of Tuesday afternoon, there were still some trouble spots.

Chief Lincoln Miller of the Marion Police Department asked that residents steer clear Delano Road as there is a large fallen pine tree leaning against the power lines.  There were also reports of downed poles on Featherbed Lane in Rochester.  Electrical outages were limited to 152 customers in Marion and 88 in Rochester before Tuesday at noon.

“We were left in pretty good shape.  This morning, clean-up was going well,” said Sgt. James Wassmouth of the Rochester Police Department.

“The Highway Department has done an exemplary job as has the Fire Department in getting stuff off the roads, keeping things passable,” he said.  Ciaburri also commended the efforts of many Rochester residents who, armed with chainsaws and pickup trucks, helped emergency crews clear away debris.

“That’s how we do it.  The people here love to help and if they can, they will.  It made clean-up a lot better thanks to them,” Ciaburri said.

•Marion Art Center has confirmed that the annual Halloween Parade is still scheduled for Wednesday, October 31 at 4:00 pm.  The celebration will be held at Marion Music Hall in the event of rain.

•The Mattapoisett Police Department has confirmed that the town Halloween Parade is still scheduled for Wednesday, October 31 at 6:00 pm.

•Mattapoisett Transfer Station will be open on Sunday, November 4, so residents may dispose of any brush or branches that fell as a result of the storm.  No fees will be assessed.

•According to the NSTAR website as of Tuesday at noon, there were 813 customers without power in Mattapoisett, 152 in Marion, and 88 in Rochester. 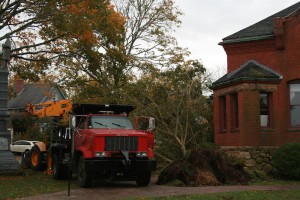