You are here: Home » News » Traffic Study Review Appeases the Board

Progress toward approval for a gas station with a convenience store and drive-thru coffee shop on Cranberry Highway picked up speed now that traffic concerns have been addressed and Rochester Planning Board members have run out of questions.

The board first addressed the engineering issues still unresolved, such as drainage, parking, and signage for the Shell station, Seasons convenience store, and Marylou’s Coffee slated for the site.

Ken Motta of Field Engineering reviewed the plans and made suggestions for some conditions of approval. There was some discussion about landscaping, storm water management, and renderings of the signage, as well as mention of a fire hydrant that engineer Mark Smith said he included in the site plan to address any tentative concerns from the Fire Department.

“I say it looks good,” said board member Susan Teal. “And I like the conditions.”

The board did not take issue with the 24-hour business hours Colbea Enterprises LLC requested, and no abutters present were opposed to the proposed 24/7 hours of operation.

“Let’s tackle traffic,” said Planning Board Chairman Arnold Johnson. The board has had lively discussions during several past Planning Board meetings about traffic, mostly surrounding the width of an access road off Route 58 and a right turn only exit onto Route 28.

Noyes determined that the Massachusetts Department of Transportation (DOT) has jurisdiction over the entrance to the access road, as well as the point of egress that the board wants to condition as a right turn only. Noyes said Colbea would need an indirect access permit from the DOT, and the DOT could eliminate the concrete island the board proposed to encourage the right turn only exit if it wanted to.

“The only reason I bring it up is because it could affect the traffic,” said Noyes. If either point of egress is altered or eliminated and causes a significant enough change to the site plan, Colbea would also have to reappear before the Planning Board for a review.

The DOT could also require that the access road be widened from the proposed 24-foot road to the standard 30 feet, but Noyes said he did not see any issue with that at this time.

The board placed a condition of approval requiring Colbea to submit a request to the DOT to change the timing of the traffic light on Cranberry Highway to accommodate the change in the traffic pattern.

With no further questions, the board closed the public hearing and asked Town Planner Mary Crain to start drafting a decision for the next meeting.

In other matters, the board approved a driveway relocation plan for Betsy Downes of 264 Marion Road, a recognized Scenic Highway.

The board also approved rescinding a Form C subdivision plan after applicant Harris Real Estate Boston, LLC finished demolishing an existing house on the land, and granted an Approval Not Required application for the same property. Four lots of the subdivision will now be reduced to only two.

The board approved the release of a $25,000 bond for the Little Quitticas solar project. 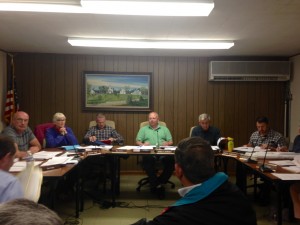