The Town of Marion has agreed to plow private ways, but the majority of residents who live on those private roads must inform the Town no later than October 16 that want to formally opt in to the service, and certain conditions must be met before the Town will assume the snow and ice removal of those private ways.

Town Administrator Paul Dawson on September 22 listed five criteria during the Marion Board of Selectmen meeting that roads will have to meet in order to protect Town equipment from damage and liability. These conditions, said Dawson, would have to be met by November 1.

First, all speed bumps must be removed.

Second, any obstacles along the side of the road such as brush, trees, basketball hoops, and bike racks must be cleared to allow a distance of 2 to 4 feet of space to push the snow from the road and keep enough room for future snow.

The third requirement is that all potholes must be filled and repaired, Dawson continued.

The fourth, overhanging branches and limbs must be cleared to a height of 13 to 15 feet to prevent damage to the vehicles.

“While that may not seem like much of a problem now,” said Dawson, once the snow and ice weighs them down they will create one.

“They create a hazard to the trucks,” Dawson said, “and we’re trying to avoid damage to our equipment.”

Finally, the roads have to have sufficient space to allow the trucks to turn around. Dawson said the Town will not allow its drivers to back out of private ways, nor will they be allowed to back into a private driveway for the purpose of turning around.

“We have to be ready to accommodate the worst-case scenario,” said Dawson. “There has to be a way for the truck to turn around.”

Private roads that want to opt in for plowing and sanding must inform the Town no later than October 16, Dawson said, in the form of a letter from road trusts, neighborhood associations, or some other group with the authority to make the request. If there is none, Dawson said, then a letter expressing the majority’s desire to opt in is acceptable.

Although the road would remain under private ownership, the property owners must not restrict public access and use of the roads, since they will be maintained using public funds. Some private ways have formally opted out of the Town’s plowing service, such as Piney Point and Bass Point Road.

“It’s imperative that they get a hold of us as soon as they can,” said Department of Public Works Superintendent Rob Zora. “There’s only so many I can add to the existing routes that I have … and we’re not going to sacrifice the service that we’ve been doing over the years.”

Although the criteria apply to all private ways opting in, the selectmen agreed that judgments on certain aspects of the criteria would ultimately be up to Zora and would be reviewed on a case-by-case basis.

In other matters, the board approved the sewer connection for existing houses on Point Road that are already near the main sewer line. The board determined that the connection would not qualify as an extension, and the capacity exists for the small group of existing homes.

Also during the meeting, Dawson announced that fire hydrant flushing has begun, so residents who notice discolored water or a loss in water pressure should be aware that hydrant flushing will be taking place over the course of the next eight weeks.

Dawson also told the board that, although he has no concrete information to deliver about the town’s National Pollutant Discharge Elimination System (NPDES) permit from the Environmental Protection Agency, he said they should expect a final permit to be issued by September 30.

“So we’re holding our breath and waiting to see the extent of the comments,” said Dawson. “It will continue to have our attention … as we begin the process of figuring out how to deal with it, what we’re going to do, and how much it’s going to cost.”

Meanwhile, Dawson said, CDM Smith, the engineering firm hired by the Town, has been working diligently to find possible solutions to the pollution discharge of the current wastewater treatment plant and the new restrictions imposed by the NPDES draft permit the EPA issued the Town.

The next meeting of the Marion Board of Selectmen is scheduled for October 6 at 7:00 pm at the Marion Town House. 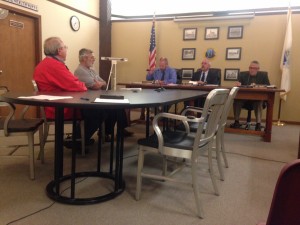