Four members of a town hall annex appointed committee on January 25 presented the Rochester Board of Selectmen with a preliminary list of seven different options the town could offer town meeting voters to solve the town’s conundrum on whether it should continue to rent space or invest in a town annex of its own.

Committee member and ZBA Chairman Richard Cutler said no one is ready to make any decision yet on which of the avenues would be best suited for the town until every possible one is conceived and investigated.

“We tried to think of every option … because if we don’t present it at Town Meeting, someone is going to as, ‘Well, did you think of….’ fill in the blank.”

Board of Selectmen Chairman Richard Nunes read the list aloud in no particular order.

First option: Do nothing. Leave the town hall as it is today and continue to lease the Town Hall Annex from the Rochester Women’s Club at a cost of $28,200 per year.

Or, perhaps the town could purchase the annex from the Women’s Club.

Another option suggests keeping the town hall as it is and building a new annex building, on either land owned by the town or purchased by the town.

Next option suggests building a new town hall to incorporate all town departments under one roof, either on town-owned land or property the town would purchase, and then converting the current town hall into a community center.

Selectman Naida Parker’s face gave a slight twinge when Nunes read aloud an option to tear down the current town hall to build a new town hall at the site that would house all town departments in one single building.

The last two options were to build an addition onto the town hall to accommodate all departments, or purchase an existing building in town to convert into an annex.

While the committee is doing its due diligence in exploring all available options, and as selectmen weigh those options, what it boils down to, Nunes summarized, is which option voters would approve a Proposition 2½ override to fund.

“And we just want to make sure that, when there is a recommendation made, that it covers a lot of bases in case one particular item doesn’t seem to be too palatable there might be other options,” said Nunes.

The committee’s intention, said Cutler, is to make a full presentation to voters, however, with the ability to point out which option is ‘it.’

When Parker raised the selectmen’s prior desire to feature a non-binding question on the Annual Town Election ballot simply polling people’s preference for a future town hall annex, some committee members sat silently, slowly shaking their heads in disapproval.

“People wouldn’t be informed enough to make a good decision and would basically be making a quick decision,” Cutler said. “And then they’d be mad if we ended up coming up with another option down the line…. We’re taking the same approach as we did with the school project.”

Committee member and Planning Board Chairman Arnold Johnson said the town would hold a number of public forums and workshops to garner public opinion and support, citing the way the Town of Marion’s Town House Committee has engaged the public along the way.

“I think that’s the same avenue that we’re going to take once we have it narrowed down a little bit and have some numbers,” said Johnson.

And coming up with some figures to attach to those options is the next mission of the town annex committee.

“Hopefully, there will be an option there that will meet with the voters’ approval,” said Parker.

“If not, then we’ll go back to the drawing board,” said Cutler.

Also during the meeting, Town Administrator Michael McCue said the special legislation to accept the 2015 Annual Town Meeting that was inadvertently held sans a quorum has left the corresponding committee “favorably,” and is closer to a positive vote in the Senate and House of Representatives for the eventual signing by the governor to make it official.

The board approved a renewed agreement with the Town of Lakeville Animal Shelter as a primary animal shelter to meet the needs of the Town of Rochester for another year.

The Rochester Board of Selectmen will join selectmen from Mattapoisett and Marion for a meeting of the Tri-Town Boards of Selectmen at 6:30 pm on Monday, February 1, at the ORRJHS media center. 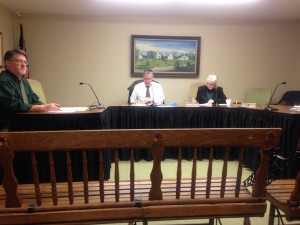