You are here: Home » News » Town Benefits from Nextel Agreement

Upon the termination of its lease, Nextel has agreed to leave its antenna and cables behind at the Mill Street water tower so the Police Department can use the cables for its own benefit, saving the Town thousands of dollars.

During a quick special mid-day meeting of the selectmen April 25, Town Administrator Paul Dawson presented the proposed deal to selectmen to approve as an amendment to the agreement between the Town and Nextel, saying the “high-quality” cable Nextel will leave behind will allow the Police Department to move its communication equipment from the Marconi tower to the Mill Street tower.

“That would be a tremendous cost savings,” said Dawson.

Police Chief Lincoln Miller said the quality of the 12 cables being left by Nextel is higher quality cable than what the Town would purchase on its own for the same purpose, and the three cables the Town will initially use will work well with the Police Department’s existing equipment.

Nextel is leaving behind $12,000 worth of cable, so the Town only needs to purchase connectors for hooking up the equipment to the cables.

“I think this is great,” said Selectman Stephen Cushing.

Miller told selectmen that once Nextel says they are completely finished with the tower they would turn it over to the Town. Selectmen are allowing Nextel to leave behind their antenna after the lease is terminated which will remain unused for the time being. 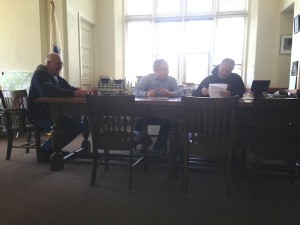