You are here: Home » News » Top to Bottom Review for Hillside Motel

Mattapoisett Town Administrator Michael Gagne told the Mattapoisett Board of Selectmen during its November 24 meeting that after receiving a press release from the Police Department and having had a follow-up conversation with Police Chief Mary Lyons, he feels there are concerning safety issues at the Hillside Motel located on Route 6.

In order to hold a lodging license in Massachusetts, according to Gagne, a business must pass Fire Department, Board of Health, Police, and Building Department reviews. With this is mind, Gagne reported that plans are forming for a “top to bottom” review of the business to ensure the community is being properly protected in what he termed a “responsibility.”

Gagne said he and selectmen would meet with town counsel in executive session to discuss the matter.

In other business, Gagne was please to announce that the energy aggregation program is ready and that residents will be receiving literature in the next couple of weeks.

He also said that the City of New Bedford, one of the communities participating along with Mattapoisett and many others, is producing a public service announcement video. The video will provide residents with information needed to make an informed decision to either participate in the program or opt-out.

“It was announced that this aggregation is the third largest in the U.S. for municipalities,” Gagne said. He gave special thanks to Representative William Straus for assisting in expediting the hearing process at the state level and noted that it was one of the fastest approvals of late.

The aggregated two-year set rate for kilowatt-hour will be 9.5 cents.

Selectman Tyler Macallister said, “Last February, Eversource was at 15.4 cents and will probably go up again…. This is a dynamite rate.” He added that, with the closure of the Pilgrim power plant, more stress would be placed on local energy sources. “This is a good move,” he concluded.

Gagne was also happy to report that culvert work on Acushnet Road, although not complete, was at the point where last Friday the road was finally opened to traffic after more than a year. “What no fireworks, no marching bands?” laughed Selectman Jordan Collyer.

Moving through the agenda, Collyer introduced new hire Christine Richards to the residents. Richards will be working part-time in the Selectmen’s Office.

The selectmen also recognized resident Laurie Nunes for her artwork that was selected for the new ‘Right to Farm’ signage being posted throughout the community. The sign depicts a bucolic farm scene with a rising silo and barn in the background and tractor in the foreground. Gagne and the selectmen discussed submitting her design to the Massachusetts Municipal Association for further consideration of recognition.

The selectmen voted to appoint Diane Tsitsos to the Tree Committee and Chapman Dickerson to the Agricultural Commission. 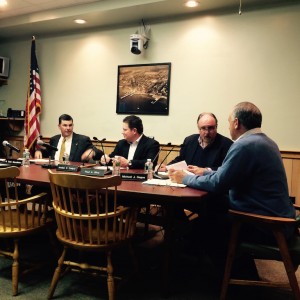