You are here: Home » News » The Heart of Technology is in the Library

The latest wave in technology education is known as “the library common,” and the Old Rochester Regional School Committee on January 14 gave the approval for the junior and senior high schools to move forward in establishing their own.

“Many technology skills are taught by librarians these days,” said Herrmann. She aims to encourage students in “creating online content and not just consuming it.” She added that students should have the skills to apply technology to academics and not just to recreation.

Frangos said “digital literacy” has a lot to do with students working collaboratively and learning to be responsible online regarding their “online footprint” and legality issues.

“It’s exciting to come to full flower,” said Frangos about the program, on which she had been collaborating with both school librarians for some time.

Also during the meeting, ORR High School Principal Michael Devoll introduced the committee to the Katie Brown Educational Program he wants to bring to the students at ORR. The Katie Brown Foundation was formed in 2001 in response to the brutal murder of a 20 year-old Rhode Island woman who was killed by a man she had dated throughout high school.

The program serves to teach students how to prevent relational violence, give them the tools they need to identify healthy and not-healthy relationship dynamics, develop personal power, and recognize the different types of relationship violence.

Devoll said parents in the community approached him about bringing the program to ORR, and he asked the School Committee to approve the program, as well as the methods for fundraising. The cost is $50 per student and the school will need to raise about $39,000 for each student to benefit from the program. He has received $1,000 so far through a grant and said one donor is willing to match funds raised, up to $5,000.

The committee approved fundraising for the program; however, it decided to wait until committee members could receive further information, with some concerned about the appropriateness of the program.

“This whole topic is heavy with emotional overtones,” said committee member Cynthia Johnson. “I would like to see … the curriculum before I sign off on this.”

Devoll said if enough funds are not raised to cover the cost for the entire school, then he will start by offering it to seniors and possibly juniors. Students would not miss any class time to attend the program, which is conducted in small groups, and students can opt-out of the program if they want to, according to Devoll.

In other matters, the committee approved $500 to seek legal counsel over a potential cut in state regional transportation funding that would result in a $107,000 dent in the school budget.

Superintendent Doug White said it is unclear whether new Massachusetts Governor Charlie Baker will seek additional cuts, and whether or not it is even legal to do so. Many school districts are asking Gov. Baker not to make the cuts.

The school district regularly receives around $450,000 annually to help defray the costs of regional school transportation. He said the loss of $107,000 “would be an impact to our budget immediately.”

The School Committee approved establishing a “regional school transportation fund,” under the recommendation of School Business Administrator Patrick Spencer. He said this would allow the district to roll over unexpended transportation funds from the previous school year into the next.

Although it is uncertain whether the district will need the fund, Spencer stated, “I suggest that at least we set the fund up.”

Devoll also pointed out that ORR received the highest score in the Math portion of the SAT in the region.

The next Old Rochester Regional School Committee meeting is scheduled for February 11 at 6:00 pm in the ORRJHS media room. 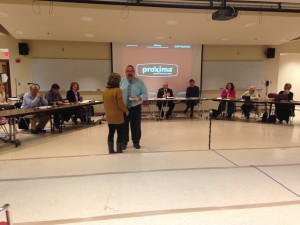