It took almost two years and a lawsuit against the Town before Dale and Laura Briggs could move forward with their plan to construct a solar farm on their County Road property, and on August 21, with no further discussion, the Marion ZBA passed a unanimous motion to grant the variance, giving the green light to begin construction.

The couple, who sat with Luke Hinkle of My Generation Energy, smilingly turned to look at each other once the vote was taken, ending a significant history of denials and delay. After the meeting adjourned, the couple took turns exchanging smiles and handshakes with the ZBA members.

“Once it got [to the ZBA] it moved along,” said Ms. Briggs to board member Betsy Dunn.

Also during the meeting, Ken Steen on behalf of Baywatch Realty asked the board for a few changes to the Village Drive development site plan, including the addition of a central mailbox within the development.

Since plans were approved, the U.S. Postal Service has changed its policy regarding new neighborhoods, doing away with curbside mailboxes and now requiring one centralized mailbox.

Steen proposed a location approximately 200 feet beyond the Route 105 entrance to the development, avoiding putting the mailbox too close to the “very, very busy” entrance.

The spot Steen recommended is a flat, green area with enough turn-around room for the mail truck, which Steen said the Postmaster approved.

Also representing Baywatch Realty, Ed Gless presented some grading changes to an area near the hammerhead cul-de-sac, which slopes down toward a pond. Some retaining walls will be eliminated from the plan as well.

Chairman Eric Pierce asked whether or not the changes would have to go through the Conservation Commission, and Steen answered yes.

“Because it’s so insignificant, nothing changes in the drainage,” said Steen. “They should just embrace it without altering the order of conditions.”

Pierce suggested continuing the matter in order to have an independent engineering consultant review the proposed revisions before issuing approval.

“I’m not a full-blown engineer, and I just want to make sure the Town’s best interests are being kept.”

Steen said the revised plan is a “far better situation” and a better option, calling it “strictly a grading issue.”

“Initially, it makes sense to me,” said Pierce, “but I am not an engineer who can magically understand all of that.

The board decided to hold off voting on either proposed revision until the next meeting.

In other matters, Anthi Frangiadis presented plans to raze an existing garage and build a larger two-car garage at the 76 Pleasant Street property of Wayne and Teresa Mattson.

The location of the new detached garage to be constructed will be shifted slightly away from the edge of the property line, making the nonconforming lot layout   somewhat less nonconforming. The existing site of the garage is 20 by 22 feet, and the new garage will be 27 feet, 6 inches by 24 feet.

ZBA member Dunn recused herself from voting but continued on to speak in favor of the matter “as an abutter.” The request was approved.

The next meeting of the Marion Zoning Board of Appeals will be September 25 at 7:30 pm at the Marion Town House. 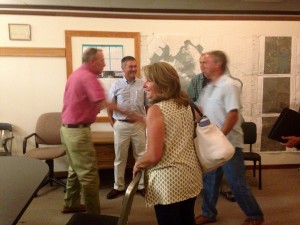