You are here: Home » News » Superintendent Storms Out of Meeting

“I wasted my time again!” Those were the last words spoken by Mattapoisett Highway Superintendent Barry Denham as he stormed out of the December 29 public meeting of the Mattapoisett Planning Board during discussion over the Brandt Point Village subdivision.

The board had received a letter from the subdivision project’s attorney John Williams that stated no road construction had begun on Phase II, and that a culvert was being installed for a turtle crossing. Denham took exception to the letter.

“They have cleared and grubbed the roadway grid, excavated, and installed a 20-foot culvert that passes under the road…. It’s a bridge by DOT standards,” said Denham. “My contention is road construction has begun, nothing has been inspected, and I don’t believe your board has received any plans. I call it road construction,” continued Denham.

Planning Board member John Mathieu asked, “Let’s say it is road construction, what is the issue?”

“The issue is we need inspections at every stage!” Denham fired back, raising his voice.

Mathieu started to say that the board had asked Denham to tell them and the contractor when he wanted to inspect the work.

“We don’t have to invent a thing – it’s in the bylaws!” Denham roared.

Denham insisted that the bylaws were sufficient for builders to work from and understand the various milestones in roadway construction to ask for inspections. Mathieu insisted that a schedule from him to the contractor was necessary.

Denham was clearly frustrated, grabbing the paperwork he was armed with and declaring, “I wasted my time again!” Denham walked out of the meeting.

The stunned board members – Chairman Ron Merlo, Karen Fields, and Mathieu – took a collective deep breath and then set about figuring out what their next steps should be, could be, and would be for this much beleaguered subdivision.

After nearly 30 minutes of discussion, they came up with a plan.

First and foremost, they will require that the developer of Phase I pave all side roads currently at the site. Second, they will request as-built plans for the culvert. Third, Merlo will talk to the Town’s engineering firm, Field Engineering, about inspecting the site. Merlo will work with Field Engineering to develop a checklist for the developer that clearly states when inspections are to be done throughout the road construction process. And last, they will confirm that all drainage systems are constructed as planned.

In other matters, the board addressed the application for endorsement of a plan believed not to require approval for the property located at 9 Hillers Cove Road, an application filed by David Haviland and Barry Cullen. With the expiration date nearing on their original filing date, the Planning Board originally held this special hearing to accommodate the applicants.

Unfortunately for the board members, the applicants asked for a six-month extension just prior to the meeting time. The board granted the extension.

Also on the agenda was Attorney Elizabeth Kunz representing the Bay Club’s request to release some lots that the Town was holding in lieu of bonds. Kunz demonstrated that the applicants had completed all necessary roadway structures to plan and asked for the release of the three lots. The Planning Board voted to approve the release as requested. 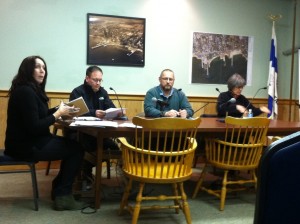