You are here: Home » News » Solar Project Advances with Uncertainty

Energy Management Committee members were a bit disappointed to hear that the planned Marion solar garden project, slated for the old landfill on Benson Brook Road, could wind up at the end of the line behind larger Mattapoisett projects already “in the queue” with NSTAR.

Committee member Jennifer Francis said on July 28 that, during a July 22 teleconference between representatives from the Town of Marion, NSTAR, the Massachusetts Department of Energy Resources, and the Department of Public Utilities, she learned that Mattapoisett already submitted several larger applications and, when Marion eventually submits its full application for its approximately 500 kilowatt solar project, “We’d go to the bottom of the queue,” said Francis.

The original purpose for the teleconference, said Francis, was to request more information from NSTAR that the utility company had not yet provided, mainly the cost of connecting the solar project to the grid. Francis said not having this information was affecting the bidding process, and Francis said one potential bid actually pulled out for lack of this knowledge.

“It was not very good news,” said Francis. “To get the details, we have to submit an ‘entire’ application.” Marion has only submitted a pre-application at this point in the process.

The deadline for bid requests is August 4 at 3:00 pm. Francis said after that, if Marion submitted a full application, they would not get the information they wanted about connection costs until at least the end of this year.

Francis commented that the Mattapoisett solar projects will probably go through, but that does not necessarily mean that Marion’s project is in jeopardy. Who knows, asked Francis. Perhaps because Marion’s project is so much smaller than the others, maybe it could somehow just “slide right through,” as Francis put it.

“There’s just a lot of uncertainty,” said Francis. “But maybe it will end up being a good thing.”

The committee agreed that it would continue to do as much as it can to keep the project moving forward until its next meeting on August 25 at 7:00 pm at the Marion Music Hall. 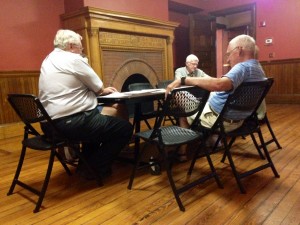