You are here: Home » News » Six Dogs is Three Too Many

A Rochester woman must get rid of three of her six dogs after the Rochester Zoning Board of Appeals denied Karen Morrison’s petition for a special permit for a kennel at her 617 Mary’s Pond Road property.

The Town by-law limits dog ownership to a maximum of three dogs. To keep four or more dogs, a special permit is required to keep a “kennel” at a residence.

Morrison said she moved to Rochester in December from Mattapoisett, which does not have a by-law limiting the number of dogs, according to Morrison. When asked why she had so many dogs, Morrison explained that her two Golden Retrievers had puppies and she kept four of them because she was unable to find homes for them.

Eight neighbors came out to ask the board to deny the special permit, saying that Morrison’s six dogs bark whenever they are outside, and sometimes late at night. One neighbor was concerned that his tenant might move out because of the noise.

“They are never outside when I’m not home,” said Morrison. “If they start barking, the first thing I do is bring them inside.” She said she thinks the move had a lot to do with the dogs barking so much.

The police were called to the home one time after one of the neighbors called to complain about the noise, but no other complaints have been documented.

“It’s brutal. It’s brutal,” said Michael Secour. “To put it bluntly, if I were buying my house now, I wouldn’t buy it.” Secour added that he has heard “blaring music” coming from the home as well, which has kept him up at night.

The neighbors were concerned that if the board were to grant the special permit to Morrison, it would be setting a precedent for other residents to keep more than three dogs.

“There is no such thing as a precedent with the Zoning Board of Appeals,” said Chairman Richard Cutler. “Each case is heard on its own merits.”

The board sympathized with Morrison, but unanimously denied the special permit.

Leaving Town Hall, when asked what she was going to do about three of her dogs, Morrison glumly replied, “I don’t know.”

Also during the meeting, the board approved an information sign, which slightly exceeds the nine square-foot maximum, for the restroom wall at the Doggett’s Brook property. Conservation Commission member Rosemary Smith told the board that the sign is manufactured at 45- by 33-inches, which the board eventually calculated, with the assistance of several cell phone calculators, as 9.3750 square feet.

The board also approved the placement of a kiosk, which also slightly exceeds the nine square-foot maximum, by the boat launch at Leonard’s Pond. Smith said the purpose of the kiosk is “to make it (a walking trail on the property) more visible that it is public open space for everyone to enjoy.” 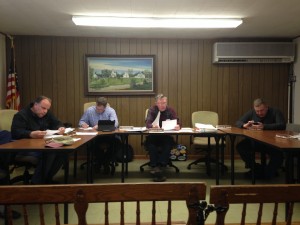