You are here: Home » News » Septic Systems and Shoreline Restorations

Two of the applicants coming before the Mattapoisett Conservation Commission did so seeking approval to move forward on repairing septic systems.

Patricia Francis, 80 Brandt Island Rd., represented by Carmelo Nicolosi of Charon Associates, needs to repair an existing septic system that was built in 1960. Francis’s parcel is nine acres comprised primarily of wetlands. The new system will have a 10-x-45-foot leaching field situated 54 feet from bordering wetland vegetation. The Commission approved the project with conditions for use of hay bales and silk screening.

The other septic system applicant was Timothy Ray, 1 Pine Wood Way, represented by Kory Medeiros of SITEC engineers. Medeiros explained to the Commission hat the full scope of the new septic system first required soil testing to determine the best location for a new leaching field. The current system is 30 years old, and he assured the board the applicant was not seeking to expand the system. Since soil testing would need to take place 20 to 30 feet from bordering wetland vegetation, Ray needed the approval of the board to proceed. The Board advised Medeiros that he will need to discuss the project with the board of health and then return to them with a notice of intent.

Beach restoration and sea wall concerns were the topic of two other hearings.

Walter Galuska, Tibbetts Engineering, representing Mattapoisett Shores Association Inc., sought permission on behalf of his client to bring in beach sand to nourish shoreline areas damaged by storms. The beach has become rutted and depleted of sand over time and the association wants to replace it with 4 inches of new sand. Chairman Peter Newton told Galuska that he needed a DEP file number before moving forward with the work and sand analysis to insure that new material would be compatible with the existing sands. Member Tom Copp also requested that the plans note limitation of fill. Conservation Agent Leidhold raised the question of boats being hauled onto shore and resting on native eel grasses. The Commission asked Galuska to discuss this with his client. One other request was made by the Board that the association look at ways to control storm water run off at the corner of Pleasant View and Grand View. Galuska will take these issues up with the association when he advises them of the continuance they received until November 13 for the beach nourishment application.

Mattapoisett Land Trust member Paul Osenkowski had an informal discussion with the board regarding concern over the sea wall (built in 1998) located at the Munro Property on Water Street situation next to the town piers. Soils are being sucked out with every tide invading the interior by inches, making the sea wall compromised further after storm damage. The Trust has limited funds for repairing the wall, and Osenkowski wanted the Commission’s recommendations on next steps. Chairman Newton said that many applicants had come before them with similar issues and that all had the same obligations when repairing them. He said that an engineer needed to be consulted and suggested that Osenkowski review the plans of other seawall repairs that are on file in the Conservation Office. Armed with that information Osenkowski will investigate further before filing a Notice of Intent.

Leidhold then gave her report noting a recent meeting she had with Harbormaster Jill Simmons and Town Administrator Mike Gagne. That meeting was to discuss the situation at Mattapoisett Landing where boats not licensed to be stored on town property are damaging the wetlands. The Commission felt that this issue of illegal boats on town property was within the jurisdiction of the harbormaster and the Board of Selectmen. The members did have some suggestions but felt they were out of their scope of authority.

She updated the Commission on the Open Space Plan, saying that they were within striking distance of completing it by the end of the year.

Rounding out the agent’s report was a letter received from the Buzzards Bay Coalition highlighting a study that noted the overall good health of Nasketucket Bay.

The Conservation Commission’s next meeting is scheduled for November 13 at 6:30 pm. 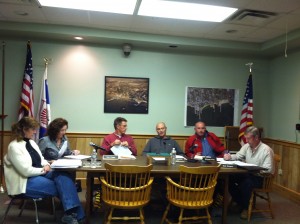