You are here: Home » News » Selectmen Review Budget and Moorings

Prior to their regular meeting on Tuesday, February 26, the Mattapoisett Board of Selectmen met with Finance Committee to review the status of the town’s budget.

The Finance Committee presented a list of known budget increases for Fiscal Year 2014 which totaled $436,054. The largest of these items were health insurance and school budget increases. The projections for FY 2014 also included $712,681 in new revenues from an increase in levy limit, state aid and local receipts. Items that have not yet been factored into the budget include supplementing the smaller department budgets which have been level funded for the past five years, as well as future employment contracts.

“I know that if we add that person we will be able to recoup the cost just by doing one project a year with the Highway Department. This will be the first new position added to the highway department in 25 years,” stated Collyer.

The budget process is ongoing in preparation for town meeting in May and both the Finance Committee and Board of Selectmen will be reviewing items in the upcoming months.

At 7:00 pm, Chairman Collyer began the regular meeting of the Board of Selectmen. At the meeting the Board received a citation from the Pilgrim Sands Rider’s Club for their continued support of the club’s activities. The PSRC holds rides at the town landfill twice a year with their next meet scheduled for April 21.

The first appointment was the annual meeting of the Tri-Town Herring Inspectors. The herring count for the past year has doubled from the previous year and stands at about 28,000 in Snipatuit Pond.

“We’re way up, which is good,” Mattapoisett’s Herring Inspector Bob Martin said. “At one point we were down to six or eight thousand, so a 100 percent increase in a year is encouraging.”

Harbormaster Horace Field briefed the Selectmen on the progress of the re-grid project on the east side of the harbor. After surveying other harbors, the new spacing has been set at 140 feet.

“Also, there are seven or eight moorings in the channel currently, mine included,” reported Field. “They’re going to have to move, I’m moving mine.”

“This will add 10 spots which will cover the cost of moving the moorings within a couple years,” said Selectman Paul Silva.

Chairman Collyer asked if the town’s software could be used to re-grid the Mattapoisett Boatyards moorings to try and get them into their allotted area. The Harbormaster agreed that they could and that doing so may free up some space for town moorings as well.

“I still have some moorings to give out this year, people just aren’t paying,” said Field. Currently there are about 70 people on the waiting list for moorings.

The Board approved $2,500 to re-grid the east side of the harbor.

Town Administrator Gagne reported that they are looking into the required equipment to add Wi-Fi to the wharf area. The service is expected to be free to use, as it will encourage commerce with local businesses if visitors are able to find information easier.

Field also reviewed the lighting for the wharf area. He is currently researching prices and will advise the Board when he has a plan. He is also waiting for a replacement sign for Holmes Wharf; the new sign that was received by the town arrived misspelt so it wasn’t posted.

“This way we can just get these items done all at once after town meeting if it’s approved.”

The last item Field addressed with the Board was a meeting he had with the Coalition for Buzzards Bay regarding the use of certain materials for flotation, mainly un-encapsulated Styrofoam.

“I’m adamant that something be done as it’s seriously impacting a resource area,” reported Field.

The Board reviewed the interviews for the position of Town Council. Administrator Gagne reported that they had conducted three interviews and thoroughly reviewed all three and now needed to make a decision on how to proceed.

“I believe we decided to choose all three,” said Selectman Macallister.

Gagne reported that each candidate worked well in different areas where the town needed advice.

“It may be worthwhile for the Board to carve up the need for services,” he stated.

Collyer raised the question, saying, “At the end of the day we need to appoint a Town Council. How do we appoint more than one?”

Gagne stated that the Board would appoint one Town Council and any other as an Assistant Town Council.

Macallister was concerned with responsiveness and suggested that a local council would suit their needs. The Board approved Jonathan Silverstein from Kopelman & Page as Town Council with regard to Town Meeting, areas of land acquisition and zoning, Attorney Anthony Savastano as Assistant Council, and Attorney Thomas as Assistant Council with regard to issues of real estate.

• Sexual harassment training will be held on March 12 at 8:00 pm at the library.

• The photovoltaic project has been advertised and there was a review of the site last week which 10 vendors attended including some very reputable companies which specialize in solar. Gagne said he is going to try a second site visit next week for some additional vendors which are interested in the project.

• The Barstow float and the finger pier work has been completed.

• All the successful high bidders in the land auction held in December have paid and the land has been transferred. The town is looking at a possible second auction in May for some additional parcels. The revenues from those items would then be available for the fall town meeting to be used for road projects.

• Melody Pacheco wanted to remind everyone about the Rabies Clinic being held at the Fire Station on Sunday, March 3 from 10:00 am to 12:00 pm.

With no other items on the agenda for the regular meeting, the Board entered executive session to discuss a police grievance, collective bargaining, non-union employee negotiations, and interest in land discussion. The next regular meeting of the Board of Selectmen will be on March 12. 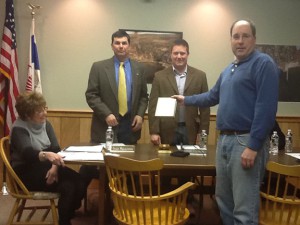