A long time has gone by since Rochester has had a gas station, commented Rochester Board of Selectmen member and Town Clerk Naida Parker on June 22. So long, in fact, that she could not accurately state how long it would take for Colbea Enterprises to receive the license from the Town to install two 15,000-gallon fuel tanks at the Seasons gas station/convenience store/coffee shop slated for the corner of Routes 28 and 58.

The two selectmen present that night swiftly approved the license to install the two tanks – one 15,000-gallon tank for gasoline and one 15,000-gallon split tank with the capacity to contain 9,000 gallons of diesel and 6,000 gallons of gasoline. The plans for the tanks, having already been approved by the Fire Department and viewed by selectmen prior to the meeting, call for double-walls and a vapor recovery system, among other standard state requirements.

Colbea Enterprises representative Carolyn Parker asked Selectman Parker when the Town would issue the license so that the company could garner approval from the state fire marshal. Unsure exactly, Selectman Parker told Parker, since it has been so long since she had issued a license for a gas station in town, she did not know.

“[It’s been] so long ago I don’t think any of us have any institutional memory on that one,” Parker said.

Only one abutter, Charles Clemishaw, attended the public hearing, and he was satisfied that the gas tanks would be subject to state standards with nothing out of the ordinary requiring approval that night.

Selectman Parker said the board is hoping to encourage further economic development in Rochester.

“This is hopefully the beginning of the development of that property on County Road,” said Parker. “And unless there was strong opposition, I don’t think we would want to turn it down arbitrarily.” 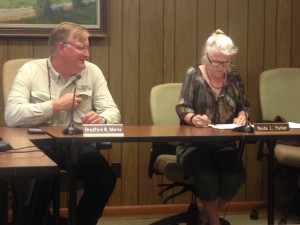