After expressing frustration over items in an article submitted by the health agent, Rochester Board of Selectmen on September 22 excluded them altogether while approving the rest of the Fall Special Town Meeting warrant.

Health Agent Karen Walega sought to increase the public health nurse’s salary line item by $5,000, double the current amount, which had selectmen scratching their heads and taking issue with the article.

“If they work under a contract, I don’t see how they could just ask for more money,” said Selectman Richard Nunes.

Walega was seeking to increase the hours of part-time Rochester Public Health Nurse Betsy Dunn as a result of this year’s Lyme disease activity and also flu season preparation. Board of Selectman Chairman Brad Morse suggested the department pay her for extra hours out of its own revolving account.

Selectmen were also bothered by Walega’s other request for a $3,200 increase to the expenses line item to pay for a biennial inspection of the old town landfill, mandated by the Massachusetts Department of Environmental Protection.

“Why was that not budgeted?” Morse asked. “I question both of these … I mean, we didn’t budget for this.”

Nunes wondered why Walega did not include the inspection expense in the fiscal year 2015 budget before the Annual Town Meeting in May. In fact, he said, in his 12 years of public service in Rochester, this was the first he had ever heard of this biennial landfill inspection.

Morse said he would not vote for it and Nunes suggested omitting the two requests from the article.

“Knowing nothing about it, I have an issue with it,” said Morse. “I would say pull parts of Article 1.”

Selectmen amended Article 1 to omit the health agent’s requests, but left the veteran services agent’s supplemental appropriation request for an additional $30,000 to cover the cost of services for veterans who recently relocated to Rochester. The State reimburses the Town 75-percent of the costs.

Article 2 is a transfer of $69,500 from the Special Education Costs Stabilization Fund to cover unexpected SpEd services for FY15.

Article 3 is a request to transfer $800 from the Sale of Cemetery Plots Fund to buy back a cemetery plot from a purchaser who no longer wants it.

Selectmen discussed how the Cemetery Commission has no budget for this purpose, and how the buyer is selling the plot back to the Town for the same price they purchased it. Nunes joked that the cemetery was not making a big enough profit for the Town, eliciting laughter from the board.

“I don’t want voters going into the polls with a brand new machine in 2016,” said Parker. “That would seriously slow down and impact the process.”

Article 5 is a request for $20,000 to conduct a feasibility study pertaining to the Town Hall Annex, which could potentially be relocated to a prefabricated building to be placed on land located between the police station and the Senior Center on Dexter Lane.

Town Administrator Michael McCue suggested requesting $25,000, with $5,000 allotted for a contingency plan in the case of unplanned expenses during the study. Selectmen did not agree and reduced it to $25,000.

Article 6 requests a transfer of $15,000 toward funding the Town’s future obligations for the cost of Other Post Employment Benefits (OPEB).

Articles 7, 8, and 9 pertain to amendments to the Town’s Zoning Bylaws.

The next meeting of the Rochester Board of Selectmen in scheduled for Monday, September 29 at 6:30 pm at the Town Hall. 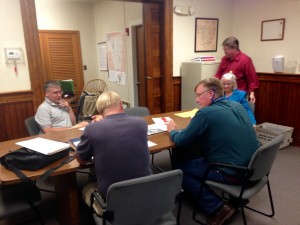