Marion Town Administrator Paul Dawson described the ideal candidate for the Council on Aging director position as one who could dream up new services for seniors and find the ways to deliver those services, even without the immediate prospect of having a physical building in which to provide them.

On December 29, the Marion Board of Selectmen had one-hour interviews scheduled for each of three prospective final candidates to take on that role. The night, however, was cut short due to the withdrawal of the applications of two of the candidates.

Elizabeth Howe of Mattapoisett was the only woman standing that night, and she answered a series of questions related to her experience and management style, filling almost the entire 60 minutes of her allotted time.

Howe, who has extensive experience working in nonprofit organizations mainly writing grants, coordinating volunteers and student interns, and serving the community at the New Bedford Chamber of Commerce, said she felt she would be the best fit for the position, not only because of her professional experience, but also because of her personal experience.

Howe told the board that her mother was diagnosed with dementia and soon after her brother was diagnosed with early onset Alzheimer’s disease. According to Howe, she stopped working in order to care for and advocate on their behalf, mainly for her mother, which is why she is currently not working and eager to fill the shoes of retiring Council on Aging Director Susan Schwager.

“When I saw this opening I thought, well, I’ve done community partnerships,” said Howe. “And I know that [the] Marion village is unique in the sense that it is really close-knit and I really just wanted to be close to home.”

She said she envisioned “bigger and better” COA programming for seniors, although sans a formal senior center at this time, “I think I’d like to be in that beginning plane and helping with that … and helping it grow.”

Howe said she understands seniors’ needs, not only because she is a new member of the aging population, but also because she saw her mother fall into what Howe referred to as a cycle of wanting to live independently, which inadvertently led to isolation and eventually depression and withdrawal.

“I find that the cycle of the people that think they want to live at home … yes, you can live at home and maintain your independence, but that creates a cycle,” said Howe. “They’re alone, solitude is a problem … [which develops into] isolation and lack of socialization … which can lead to a very lonely life. They have the time, but they don’t have anything to fill it with.”

Selectman Jody Dickerson asked Howe about her experience with budget development and maintenance, and Howe told him she had worked with a $95,000 budget in the past as part of her responsibility building budgets, upholding them, and also writing grants to supplement them.

Her managerial style is more casual, Howe told the selectmen, and she assured selectmen, when asked, that her past positions dealing with the public put her under a considerable amount of public scrutiny to which she responded professionally.

“At the chamber, [the public] expected us to know everything,” said Howe. But sometimes, she admitted, she did not have the information one person might ask of her. “But I would always make sure that if I didn’t know, then I would find out and get back to them.” As for scrutiny, yes, she said, for she had been working in visitor and guest services her entire professional life.

Although she could not cite any other specific examples of time when she was called upon to advocate for the elderly beyond her own family members, she did say that her communication skills, especially her written ones, make her adaptable to most situations.

Howe said it would be her job to provide a “home away from home” for Marion seniors. “A destination that’s comfortable and where people can be engaged. All through my professional life that’s what I’ve done … as part of the service industry providing services, just like the senior center would be providing services,” said Howe.

She turned to a need for greater communication with the aging population because, although society is rather connected via social media, “Well, it’s not, for seniors.”

Howe’s ideas for furthering the COA services included utilizing the music hall more as a resource, as well as area businesses that might support the local community.

“I just really believe that we have so much here … to tap into, so that is where I’d start,” said Howe. “Without a physical building, we could still do a lot.”

After the interview, selectmen discussed where they would go from there in the hiring process, in light of the two withdrawals – one withdrawal the night before and one that very morning.

“I’m not comfortable interviewing just one candidate,” said Chairman Stephen Cushing. “See if we can get some additional candidates to apply,” he said to Dawson.

Dickerson had met with all the candidates prior to the selection of the final three as part of the hiring committee and he told selectmen, “They were very good, but I think it’s important that the two of you have something to compare it to.”

“Even one more would be good,” said Selectman Jonathan Henry.

The board decided to have the hiring committee re-advertise the position; however, Howe is still in the running as a final candidate.

The next meeting of the Marion Board of Selectmen is scheduled for January 11 at 7:00 pm at the Marion Town House. 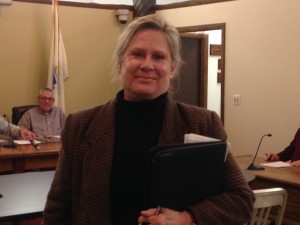