You are here: Home » News » Schools Highlight Points of Pride in Test Results

Not all of the PARCC exam results are out yet, but MCAS and the science portion of the 2015 PARCC results were discussed during the November 19 meeting of the Joint School Committee, with the principals from each of the five schools giving a brief overview of their school’s performance.

Sippican School fifth graders scored 11 percent higher than the state average in the advanced and proficient categories in the science MCAS. Principal Lyn Rivet said she was especially pleased that the fifth graders performed well on the majority of Physical Science questions as well as Life Science.

At Old Hammondtown School, Principal Rose Bowman was happy to report that Mattapoisett fifth graders scored 12 percent higher than the state average for Earth and Space Science/The Earth in the Solar System. Mattapoisett, said Bowman, scored highest in Life Sciences and Characteristics of Plants and Animals questions, where 94 percent of students answered them correctly.

At Rochester Memorial School, Principal Derek Medeiros was happy that RMS students also scored higher than the state average, by 10 percent, in the advanced and proficient categories. They performed best in questions pertaining to Technology/Engineering, outperforming the state by 13 points. They also outperformed the state average by 12 points in Earth and Space Sciences questions.

Medeiros said the RMS students are benefitting from the use of Chromebooks in the curriculum, which they use during their science block.

“What we’re most proud of is this uphill average,” said Brogioli. “I like the upward trend.”

At the high school, Principal Michael Devoll gave the results of the entire MCAS exam taken by high school students last year – high school did not participate in PARCC – and pointed out that in ELA, the school moved from a 47 percent advanced scoring to a 53 percent, and the advanced/proficient category increased from 94 percent to 98 percent. Failures went down, from 3 to 1 percent.

Devoll said there is only one school in ORR’s cohort that scored higher than ORR.

In Math, advanced went up from 56 to 63 percent, and the advanced/proficient category went up by two more points, up to 89 percent. Failures were reduced from 5 to 3 percent.

In Science, advanced/proficient rose from 56 percent to 63 percent, and failures reduced from 3 to 1 percent.

“We’re moving high numbers in the right direction and reducing our failures,” said Devoll. “I only expect our scores to continue to rise….”

The next meeting of The Joint School Committee is scheduled for January 21 at 6:30 pm in the ORRJHS media room. 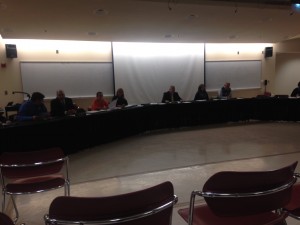