You are here: Home » News » Rochester Gets Electric Car Grant

Rochester Town Administrator Suzanne Szyndlar announced on August 22 that the Department of Environmental Protection has awarded the Town of Rochester a grant to acquire three electric vehicles and charging stations under the Massachusetts Electric Vehicle Incentive Program.

The grant provides up to $7,500 per battery electric vehicle and up to $10,500 per charging station. The grant will cover a three-year lease on the vehicles at no cost to the Town.

Members of the Rochester Board of Selectmen received the good news during its August 22 meeting and briefly discussed the matter.

The Massachusetts Electric Vehicle Incentive Program serves to encourage a demand for electric vehicles in Massachusetts “and to help the Commonwealth meet its air quality and Global Warming Solutions Act goals,” as Szyndlar read from a letter from the DEP.

The Town will go out to bid for the three vehicles and will accept the lowest offer from regional electric car dealers.

Szyndlar said that once the town-owned buildings are assessed for voltage and electric charging station viability, she would issue a recommendation to selectmen on where to house the charging stations.

Also during the meeting, Conservation Agent Laurell Farinon told selectmen that the Town would need to once again file with the Department of Environmental Protection for a waiver to the National Pollutant Discharge Elimination System (NPDES) regulations pertaining to stormwater discharge systems and culverts in town.

Farinon said that back in 2003, the town applied for and was successfully granted the waiver, meaning the Town was not subject to updated DEP regulations regarding stormwater discharge systems. A number of other Massachusetts towns either received waivers or were exempt as well.

Now, with further updated NPDES regulations, Farinon said the town is up again for another waiver request.

“We’re confident … that we can apply for and make the argument that we do not need to be part of this program,” said Farinon.

The Board of Selectmen voted unanimously to allow Farinon to work with the town administrator on drafting the waiver request.

In other matters, for the first time since 2013, the town will be seeing a significant increase in its health insurance premiums with its insurance provider, Mayflower Municipal Health Group.

Szyndlar said, to the board’s chagrin, that the town will receive a 15% rate hike this fiscal year.

Szyndlar said that for four years, the town has enjoyed only a minor increase to the tune of less than 1% due to some long-term planning and use of reserve funds.

“It probably would have been better to do small increments,” said Szyndlar, “rather than hit the reserves…”

This increase trend will likely continue into the future, Szyndlar stated.

Selectman Richard Nunes said that these types of rate hikes only serve to prompt municipalities to look elsewhere for health insurance coverage.

Szyndlar commented that the municipal health insurance rates for the Town of Rochester are still considerably lower than those of surrounding towns at this point in time.

“We’re better off riding this out and attending the meetings and being educated and seeing where this can go,” Szyndlar said. 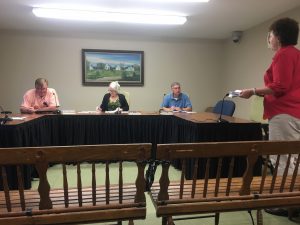