The Rochester Board of Selectmen voted to approve a new wind power project for the town that would be effective in 2013.  The decision was made at the board’s regular meeting on Monday, July 30.

“It’s a win-win for everybody,” said Town Administrator Rich LaCamera.

The project, which is the same one that Marion signed last week at their meeting on Tuesday, July 24, would provide a renewable source of energy for the town and would save the town 20-30% annually on electric bills.

Keith Mann of Future Generations is the Project Manager and owns the land in Plymouth where the wind farm would be located.  The project proposes four wind turbines that would sell their energy to NSTAR in the form of net meter credits. NSTAR would then bill the towns at a discounted rate. The towns would pay 80% of the bill, and NSTAR would pay back 20-30% for the towns to keep in a fund each month.

Due to the time it takes to manufacture the turbines, the project will not begin until 2013.

In other news, the board voted to draft to requests for proposals for a new town hall and for various road improvements.  According to LaCamera, there are $5 million worth of road improvements to be made in the town and nowhere near enough money in the town’s budget to make them.

“There’s no way under the current tax structure that we can pay for that,” he said.

LaCamera suggested applying for a grant that would help fix the roads and the town wouldn’t have to pay any money back until 2014.  Additionally, LaCamera suggested drafting plans for a new town hall that would be located on Dexter Lane between the Police Department and the Council on Aging.

In order to maintain the current building, regardless of whether or not a new building is constructed, there are approximately $250,000 worth of repairs to be made to the structure’s windows, siding and trim. The town hopes to repair the building so other departments in the town could use it for years to come.

‘The goal needs to be to protect this building because if we don’t, we are going to lose it,” said LaCamera.

One road that could see improvement sooner rather than later is County Road after the Selectmen voted to approve a grant proposal to be submitted to the South Coast Railway Technical Assistance Fund.  The grant would research ways County Road could be improved.

Selectman Brad Morse said the goal is to have the status of County Road upgraded so it could receive more federal funding.  The grant proposal will be signed by both Marion and Wareham and will be drafted by Marion’s grant writers.

David Souza and Julie Koczera gave the board a final update on the Rochester Country Fair, which will begin Thursday, August 16 and run through Sunday, August 19. The two planners are very pleased with how the coordinating of the event at its new location has gone thus far.

“Thanks to the town for all their support,” said Souza.  “It’s been a fun project but it’s also been kind of a big project.”

Souza and Koczera will be posting signs around town to guide fair-goers to the new grounds.

Rochester Police Chief Paul Magee informed that one lane of Pine Street will be closed to traffic in order to give pedestrians ample room to walk to the fair’s new location.  Magee also said he has increased staffing for the fair in order to prevent any unanticipated problems.

Magee announced that Animal Control Officer Anne Estabrook has been granted a two-month leave of absence for personal reasons.  He said he will receive help from neighboring towns in order to fill the gap.

Town Clerk Naida Parker wants to remind residents that this year’s State Primary Election will be held on Thursday, September 6 as opposed to a traditional Tuesday.  The reasoning for the change is the observance of the Jewish holiday Rosh Hashanah.

The Rochester Board of Selectmen will meet again on Monday, August 13 at 7:00 pm in Town Hall. 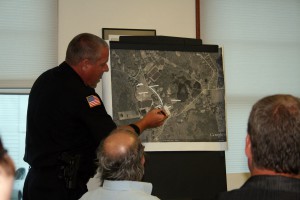