Residents who raise a ‘ruckus’ get attention. This was apparent at Wednesday’s Conservation Commission meeting at the Marion Town House where a Notice of Intent filed by the Town of Marion, c/o Department of Public Works, to rehabilitate River Road in order to improve roadway infrastructure and roadway safety was discussed.

On April 9, residents heard a presentation on the repaving and reconfiguration of River Road and expressed concerns regarding the presentation by Shawn Syde of CDM Smith. The overall feeling of the four residents who spoke at that meeting was that the work, as presented, would not solve the basic issue of constant flooding and water pooling in the road after heavy rainfall and snow melt.

After the April 9 meeting, Syde met with DPW Chief Rob Zora, went out to River Road and met with residents, and spoke with other residents over the telephone. The project was reworked, with berms on both sides of the road to keep water runoff in the road and off residents’ properties. The existing outfall pipe will be replaced with a new pipe at the same location.

Syde presented a revised proposal of what and how River Road looks now and how it will look after the repaving. At issue are continual flooding of the road during heavy rainstorms, snow piles – created by plows – sitting over a catch basin and blocking its use, and sand washed into basins rendering them only partially useful.

The proposal has River Road staying at the same elevation and width, but straightened out in certain places. The entire road will be replaced, a 12-inch pipe will run underground beneath it, and two filtered catch basins with catch hoods will collect any oil and grease. The Department of Public Works will maintain the drainage swales and basins.

“This looks great, we are looking forward to it,” said Chris Collings of 13 River Road. Collings noted that the town purchased a vacuum truck several years ago to suck sand out of drains. “We look forward to more than annual cleaning of the drains,” said Collings.

Syde will provide copies of the new and improved plan to the board, and they will be available to the public to view at the town house.

In other business, a Notice of Intent from the Town of Marion, c/o Harbormaster, to replace an existing 96- by 12-foot float system with a new 110.4- by 10.6-foot concrete float system held in place with eight piles at Island Wharf was discussed. Harbormaster Michael Cormier and Scott Skuncik of CLE Engineering addressed the board. The project has already been approved by the Army Corps of Engineers. A Waterways Chapter 91 permit for a ‘modification to an existing license’ has also been approved.

“The float will be more narrow, but longer,” said Cormier. Skuncik noted that the new pilings will be capped and should have a lengthy lifespan. “The existing pilings have an expected life of approximately 26 years, but they were not capped. The new pilings will be capped and will last longer,” said Skuncik. The greenhouse pilings will not be treated, making them more ecologically safe, according to Skuncik. The float will stay in the water all year and not be removed for the winter.

The next hearing was a Notice of Intent by the Town of Marion, c/o Harbormaster, to attach a 30- by 6-foot float, held in place with a pile, at the end of the floats to the right of the launching ramp at Old Landing, off Front Street, to add two piles to the eastern-most floats off the north wharf and to replace up to six piles as needed. Cormier explained that the extension of the float will allow three boats to be hauled at one time. “This is a hurricane preparedness improvement,” said Cormier.

The board discussed an Amendment to an Order of Conditions for landscaping activities for N. George and Laurie Host of 456 Point Road. The amendment is to increase the scope of work to include the installation of two pilings to anchor the float, as required by Department of Environmental Protection Waterways. David Davignon of N. Douglas Schneider & Associates represented the applicant. The request was for the installation of two pilings and to eliminate the bottom anchor chain system and replace it with a Danforth lock anchor system that would eliminate a chain moving back and forth on the bay bottom with the rise and fall of the tide. Two abutters attended the meeting and said they supported the project as presented.

Last, a Full Certificate of Compliance for razing the existing dwelling and constructing a new dwelling with an attached garage, and for replicating wetlands and landscaping was issued to William and Karen Curley of 154 Spring Street. 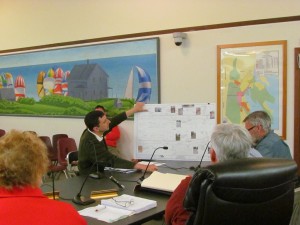