You are here: Home » News » Resident Furious at Aquaculture Farmer

The Marion Conservation Commission on October 14 was ready to approve Shea Doonan’s proposed aquaculture farm off Ram Island. Instead of voting, however, the commission watched on as contention mounted between Doonan and a Ram Island neighbor vehemently opposed to the project because Doonan failed to inform him of the plan.

“I find it very disappointing that the first time I’m meeting this gentleman is right now,” said Ram Island resident Michael Moore, shaking Doonan’s hand. The cordiality did not last, though. “I’m also disappointed because the first time I heard about this project was yesterday [from the newspaper].”

Moore did receive a certified letter alerting him to a Marion Board of Selectmen meeting scheduled for October 20 to discuss the project, which selectmen sent as a courtesy to Ram Island residents to hear their input before initial approval of the aquaculture farm.

Although Doonan followed legal procedure for abutter notification, Moore accused Doonan of jettisoning his weak attempts to reach out to him to garner Moore’s opinion on the project, which Moore claims will interrupt the channel he uses to sail his skiff from the island to a licensed pier at the back of the island. He said 30- to 32-foot boats often pass through an area too close to where Doonan planned the aquaculture farm.

“I’m feeling very much behind the eight ball,” said Moore. “As an abutter, I’m disappointed to be here at this point and not earlier in the process.” He said he was frustrated because, legally, Doonan should have conferred with him.

Moore sighed and turned to Doonan.

“What the hell? Is it that hard to find me?” said Moore. “I find that extremely insulting.”

Doonan said he tried, to which Moore replied, “Well, you should’ve tried harder.”

Doonan, looking visually perplexed, said he went through the proper channels with Town Hall, and he posted his legal notice two months ago in The Wanderer as required at the start of the application process. He said he also worked with the harbormaster and altered the plan according to the harbormaster’s suggestions. After looking further into the matter, Doonan determined that Moore is not located within 100 feet of the project, which is why Moore received no certified letter pertaining to the ConCom meeting.

“I suspect that we could’ve worked something out,” said Moore, “but I don’t see how we can, given where you’re currently at.”

Hills asked Doonan if he could still move the proposed placement of the markers over to the right, further out of the way.

Doonan also proposed to cut down the area of his aquaculture farm in half, from one acre to a half-acre, saying to Moore, “Maybe I’ll have less than a half acre, but I’m not worried about that as long as you can get out.”

Hills asked Moore if he thought it possible to sit down with Doonan to come to an agreement, and Moore refused.

Doonan reiterated that he followed the application process, acquiesced to the harbormaster’s demands, “gave [Moore] a football field between the land … for [his] boat to get through,” and, as of that day, had satisfied all that the commission had asked for. Doonan urged to commission to take its vote based on its jurisdictional aspects of the project under the Wetlands Protection Act.

“We’re here to protect the environment,” said Hills “Eh, you got me.…” he said after pondering if the commission should entertain Moore’s opposition.

The commission, finding itself in the middle of the matter, did not know whether it should approve the application based on its merits or if it should continue the hearing until after the selectmen’s meeting.

“It puts us in an uncomfortable situation,” said ConCom member Joel Hartley.

Doonan said he meant no disrespect to Moore for his failure to contact him.

The hearing was continued until October 28.

Also during the meeting, Robert and Virginia Beans of 35 Holly Road were approved for a septic system replacement.

Dale and Laura Briggs of 23 Dexter Road received approval for a boardwalk replacement and expansion, plus the addition of a garage.

John and Mallory Waterman of Water Street (across from 2 Main Street) received an amendment to their Order of Conditions to remove invasive species from the property.

Annmarie Levins and Linda Severin of 53 Dexter Road received a Negative 2 and 3 determination to replace an existing shed with a new one.

David and Susan Titus of 36 South Street received a Negative 3 determination for the razing of an existing porch to build a four-season room in its place.

The Marion Open Space Acquisition Commission request to expand the riprap in the spillways, repair the interior dike, and redesign the exit culvert at Grassi Bog on Mill Street was continued until November 12.

The next meeting of the Marion Conservation Commission is scheduled for October 28 at 7:00 pm at the Marion Town House. 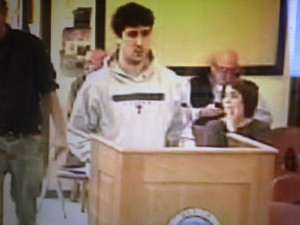