Can we vote or can’t we vote? That was the million dollar question on August 27 when the Rochester Planning Board, poised to approve the site plan review with its town counsel-approved draft decision in hand, lacked a quorum to constitute a “super majority” of five members, which the chairman thought was needed to approve the Rochester Crossroads LLC application.

Attorney Rich Serkey for Rochester Crossroads LLC sat patiently as the board moved through the other items on the agenda to see if board member Susan Teal would make the meeting in time to vote on the approval of the Phase I construction of the access roadway and drainage area for the Cranberry Highway property.

At first, Chairman Arnold Johnson expressed concern over the lack of a quorum, and after all the other matters were addressed, he stepped out of the meeting room with a cell phone and called Town Counsel Blair Bailey to see if the board could still make the vote with only four members.

Johnson returned and announced that the application, being a site plan review and not a special permit, did not require a super majority, but it did require all four votes to be affirmative for final approval – a gamble Serkey took.

There were a couple of changes to the conditions made earlier that afternoon, including the combining of two separate conditions into one, which Johnson said did not alter the intent, and some language was changed to avoid a problem should an unresolved zoning boundary require a trip before the Zoning Board of Appeals.

The board’s decision was unanimous and the site plan review was approved.

The site plan review for Colbea Enterprises was continued until September 9 at the request of the applicant in order to allow for time to organize the traffic study for the proposed filling station/convenience store/coffee drive-thru on property owned by Rochester Crossroads on Cranberry Highway. The board approved a contract for Field Engineering, acting as consultant for the town, to work with Greenman-Pederson, Inc. on the traffic study.

In addition, Johnson mentioned a discrepancy between previously completed site calculations and Colbea’s recent predevelopment calculations, which differed slightly and need to be clarified.

Other than that, the chairman stated that he does not anticipate any further delays in the process for approving the site plan.

“Everyone seems to be on board, barring some catastrophic revelation,” said Johnson, saying the board should only need to continue the matter for one more meeting “[then] have it all wrapped up … for the first meeting of September.”

Also during the meeting, the board addressed a request from Grace R. Ashley of Dr. Braley Road for an Approval Not Required application to split one lot into two. Part of the property lies in Freetown and the other lies in Rochester.

Johnson said the application was incomplete since it was not totally in compliance with Rochester’s rules and regulations, which require that frontage and well locations be marked on the plan.

The board also discussed amendments to the zoning bylaws in preparation for bringing the proposed changes to a Special Town Meeting in October.

Two applications for Harris Real Estate Boston, LLC regarding King’s Highway were both continued until September 23 at the applicant’s request.

The next meeting of the Rochester Planning Board is scheduled for September 9 at 7:00 pm at the Town Hall. 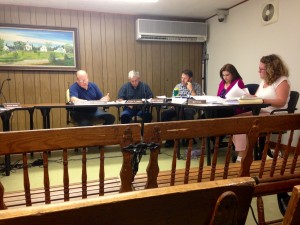