The site plan review for the proposed solar panel array at Little Quittacas Pond took center stage at Tuesday night’s meeting of the Rochester Planning Board. The Board had requested an independent assessment of the plan, which was conducted by Field Engineering.

TRC Engineering, which has proposed the solar array, responded to the findings on Field’s report.

“There were two places where we have not provided full resolution to what Field had to say,” said Sam Moffett on behalf of TRC Engineering.

Moffett said that TRC was hesitant to agree to take out a bond for the planting and maintenance of the trees that would be planted along the proposed berm that would border a nearby neighborhood. They also questioned the need to replant vegetation within a year of the construction of the array.

“If you don’t want to put up a bond, you have to guarantee us something that would provide us a safety net on that,” said Planning Board Chairman Arnold Johnson.

Jay Myrto of RGS Engineering had suggested he supply the Planning Board with the contract drawn up between TRC and their landscape engineer rather than put up a bond. They would prefer a two-year maintenance warranty over a bond.

Planning Board member Gary Florindo was concerned that, if the land or lease changed hands, the new owners would be responsible for maintaining the vegetation.

“Whoever owns it and over time decides to sell that land with the lease, [site maintenance] goes to them,” he said.

Planning Board member Susan Teal said that she felt there should be a minimum amount of maintenance for the planted vegetation so that natural flora would be encouraged to prosper.

“I think it’s burdensome on the proponents to maintain these trees in perpetuity. Before you know it, we’ll be telling them where to plant them, what color they should be. The landscaping plan, as far as I’m concerned, is ‘do nothing,’” said Teal. “They need to be pruned, but they need to be let to live to provide the aesthetic and features that the abutters and those who drive down the street are looking for. After that, just let it grow.”

John DeMaggio of the Planning Board said that he felt that while it may not be necessary to actively trim the planted trees, he would like whoever is in charge of maintaining the site to file an annual maintenance report.

“We just have to know that someone is checking on it,” DeMaggio said.

The question of responsibility for the site has been a point of contention since the project was originally proposed.

The land is owned by the City of New Bedford, but is being leased to ConEdison Solutions for use of the array, which is being designed by TRC but constructed by Real Goods Solar.

With nobody present representing New Bedford, Johnson felt it was unwise and unfair for them to proceed to terms and conditions without their knowledge or approval.

“How do we know that they agree with these conditions?” he said.

“This is unique. The City of New Bedford is the landowner, but once the project is completed, it’ll be a different entity who runs it,” said Town Administrator John Charbonneau.

“Usually we have the owner present or a letter or affidavit,” said Johnson.

“I think this could be easily settled. I’m sure we could get that letter or talk to ConEd,” said Myrto.

The conversation then shifted to the specifics of the proposed working hours laid out in the plan.

“What we are proposing are that the work hours for construction of the project be limited between the hours of 7:00 am and 6:00 pm Mondays through Fridays and 8:00 am to 5:00 pm on Saturdays,” said Moffett.

There are no plans to work on Sundays during the construction. The engineers estimate that the project could take up to nine months to complete, with three months dedicated to clearing and grading, and six months for laying and wiring the panels.

Teal was worried that there would be work being done in the dark during the later afternoon hours, but Myrto said that they would not be working in the dark nor would they bring in lights to illuminate construction.

Heavy equipment, which often requires time to warm up, would not be engaged until 7:30 am during any day of construction.

“A lot of work on the array is mounting modules. It’s quiet work. The only noisy part is to use a construction forklift to spread them around,” said Myrto.

A decision would not come tonight, though, because the Town needs to consult further with their engineer on the information shared by TRC during the meeting. Johnson said it was too soon to get a draft decision by the next meeting.

“The draft decision would be drafted and it would be sent to us and to you folks and Town Counsel as well,” said Johnson. “Then they would come back to the following meeting for any tweaks or changes. But I think we’re getting pretty close,” he said.

Johnson was confident the entire process could be finished by the first meeting of the new year.

In other business, the Planning Board approved the division of a 25-acre parcel of land owned by Thomas Gayoski on Alley Road. The area was cut into three lots in order to build new homes in the future.

The next meeting of the Rochester Planning Board will be on Tuesday, December 4 at 7:00 pm at the Town Hall. 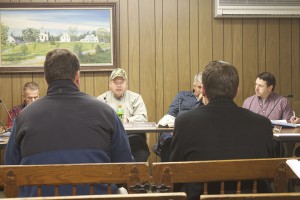