Instead of receiving a water and sewer bill twice a year, the Department of Public Works – represented by DPW Chief Rob Zora, Becky Carvalho, and the Town of Marion accountant, Judy Mooney – presented the Marion Board of Selectmen with a proposal to change the billing cycle to a quarterly billing, which the BOS approved.

“This alleviates a cash flow for residents,” said Mooney, who explained that the cycle avoids other town billing dates for real estate taxes and auto and boat excise taxes. Along with Mooney, Zora and Carvalho addressed the board with a water and sewer rate study and the appeal for quarterly billing.

“Water and sewer rates have not risen since 2007, and we will look at the rates in six months to determine if changes need to be made,” said Mooney. Carvalho noted that 95% of the properties in Marion are now on metered ‘drive-by’ reading, saving the town much time and effort in re-reading erroneous mailed-in meter readings. Selectman Jon Henry asked if the new billing cycle would require more staff and Zora, Carvalho and Mooney all said “no”.

At the start of the meeting, a moment of silence was held for Nathan B. Nye, Sr. at the Tuesday meeting of the Marion Board of Selectmen. Nye was a long-time town employee and all around ‘good guy‘ who passed away on January 18. The audience stood and contemplated his service to the town which included over 50 years with the fire department and 17 years as head of the Department of Public Works. “I’m sure St. Peter has him busy already,” said Selectmen Jon Henry. Henry noted that the Nye family was ‘colonial’ and were part of the first settlement of the area. “They are good, solid, steady, hard-working people,” said Henry, “Nate was a good egg.”

In an ongoing effort to connect town boards, two boards presented their purpose and mission to the BOS. First up was the Conservation Commission, with Vice-Chairman Norm Hills informing the board of the basic reason for the board and its efforts. Hills noted that the board’s sole intent is to enforce the Wetlands Protection Act for coastal, waterfront and inland areas of the town. Hills, in his presentation, noted that the Conservation Commission needs to fund eradication of fragmites in the Sprague’s Cove area, near Silvershell Beach, and will increase their budget to accommodate the issue.

Hills also thanked Conservation Commission Secretary, Diane Drake, and noted that she is a crucial and important component in the board’s work. “We want to consider training someone to learn from her … she is completely informed about by-laws, conservation and the myriad paperwork that goes into this complex board,” said Hills.

The Marion Energy Commission presented next and noted their effort for the community to come to a presentation at the Marion Music Hall on February 5 at 7:00 pm for a Solar Energy presentation, with light refreshments, great information, and exhibits to reduce CO2 emissions and to reduce energy bills for residents.

In other business, the board signed an agreement with CDM Smith for Phase 1B, which was approved at the October town meeting for approximately $290,000 for roadway improvements in Marion village from Cottage Street to Water Street. More information on exactly which portions of the streets are available at the Marion Town House.

Lastly, the board signed a contract with Tata and Howard to design a replacement for the Great Hill Water Tank. The tank will be reduced by one half and its use is for fire hydrant pressure. The town meeting of 2011 approved the design phase. At the meeting, the proposal for design was at $93,000, according to Town Administrator, Paul Dawson. 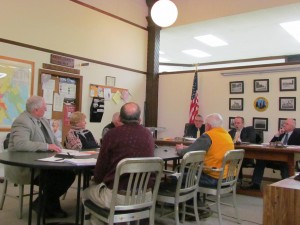