You are here: Home » News » Potential Moratorium Bylaw for Dispensaries

The Rochester Planning Board met Tuesday night and among many issues discussed was the potential implementation of a moratorium bylaw for future marijuana dispensaries within the town.

In November, a state law passed that regulates the cultivation, distribution, possession and use of marijuana for medical purposes. This law would enable the creation of marijuana distribution centers across the state.

John Charbonneau of the Board recommended that it approve a future motion to create a moratorium bylaw that will not allow marijuana dispensaries to operate within Rochester until the state figures out what they want to do about legislating the new law.

“The state does not know how to deal with the fact that each county must have at least one dispensary and no more than five,” said Charbonneau. “That’s [the moratorium] what I’m recommending. They’ve done the same thing in New Bedford and Wareham.”

The moratorium would have to be approved at a future town meeting in order to take effect.

The Board also unanimously approved a motion to continue the public hearing on a potential project at Shawmut Associates, LLC of 50 Cranberry Highway in Rochester.

It appears that many requirements must be met prior to approval for changes to the site. Regulations regarding water, rainfall basins, repaving of existing roadways around the facility, wetland setbacks, buffer setbacks, and numerous other requirements must be met. Also, engineers will have to work to make sure the redevelopment can occur legally.

Representatives for Shawmut Associates said that they also plan to cap a pre-existing well and remove a transformer that would be in the way of the new paving changes. They also need to have a site plan review by someone from the Board as well as approval from the Massachusetts Department of Environmental Protection before work can begin.

“We’ll probably set a date at our next meeting and get out there and inspect it,” said Johnson.

The Board showed some concern that the pre-existing truck scale may be too close to part of the potential building, and they’d like to make sure there was ample room.

“It’s just something that we’d like to see,” said Johnson.

Johnson added that there will future hearings to keep those who are interested in the project up to date.

A motion to continue the public hearing will be held on March 12 at 7:30 pm, after the Planning Board meeting. 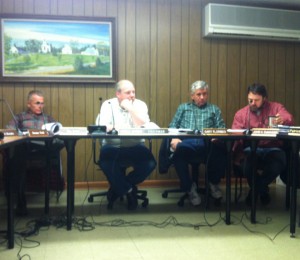