With nine members gathered, the Marine Advisory Committee discussed a wide range of items that impact the lawful and peaceful enjoyment of Mattapoisett’s waterways.

Also in attendance for the first time was Jill Simmons, the town’s new harbormaster, along with her predecessor, Horace Field.

George Beringer of Groton, who has had a mooring in the harbor since 1994, went to the meeting at Field’s suggestion to voice his concern about the limited number of “out-of-town” dingy permits. He said that if one isn’t able to be in the area on the evening of January 1 each year, you’d miss the January 2 rush to secure one of the five permits issued each year.

There ensued numerous suggestions brought forward by the committee members, but most were either too far from Berginer’s mooring location or required a resident parking permit, which Beringer can not obtain.

Field concurred that there is a line on January 2 for one of the precious permits and that it had always been this way. But it was also pointed out that since increasing the number of moorings in the harbor this important matter of non-resident dingy permits had not increased along with them.

Member Carlos DeSousa made a motion to review this issue along with all rules and regulations and to have the entire document completed and ready for implementation by late October. This was seconded.

In the meantime, Beringer will work with Field to find an accommodation once a site is agreed upon for his dingy and the safety of his motor vehicle during his overnight stays in the harbor.

Next, member Walter Reid gave his subcommittee report on what other towns in the area are charging for various marine activity fees. This matter has been discussed during previous monthly meetings in an effort to bring the Board of Selectmen reasonable increase suggestions. Reid recently spoke to the Fairhaven Harbormaster and learned that this town wished to keep costs low for residents so that the average family would not be priced out of enjoying the water. For instance, they do not have mooring fees but do charge residents $1 per foot as a waterways usage fee and $4 per foot for nonresidents using their resource for more than 14 days per year. Fairhaven does have an active commercial fishing fleet, which helps to subsidize the town’s financial needs for water-related budget items. Several more towns still need to be polled before the subcommittee will be prepared with their complete report and recommendations.

Regarding infrastructure work, Field said that electrical work had begun at the piers but is scaled back due to only receiving $100,000 during Town Meeting – about a $30,000 shortfall from his estimated needs for this project. Work on the pilings has not begun yet but will soon he said.

Field also shared that the two interns from Mass Maritime Academy were working out well and that he had hired Wayne Ferreira as part-time assistant harbormaster, which is helping with the long days and weekend workload during the busy summer season.

Finally, the committee discussed the need for clearer markers in the harbor for the recreational area, which would help with safety and clarity for those wishing to water ski and participate in other higher speed water activities. And the need for more “no wake” signage in those areas currently deemed so. Early morning boaters are moving through the no wake area near the recreational area too fast, which is unacceptable under the current rules. 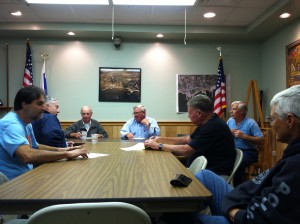