A complex landscape design plan proposed for 456 Point Rd. was discussed at a lengthy meeting on Wednesday by the Marion Conservation Commission. Applicants N. George Host and Laurie A. Host filed a Notice of Intent to landscape the property. Work includes trimming or removal of select trees, underbrush, and ground cover, and the replacement of vegetation as shown on their submitted landscape design plan. The parcel is six and one half acres.

The applicant was represented by David Davignon, N. Douglas Schneider & Associates; Chris Dindal, Morgan Wheelock, Inc.; and Jim Manganello of LEC Environmental. The parcel has a delineated wetland in the middle of the property and a second, fingerlike wetland on the property. Essentially, there are two isolated, vegetative wetland systems on both sides of the proposed driveway.

Davignon broke the discussion into nine sections, some with sub-sections and described the proposed activities in each section, which included removing a large number of trees, some located in the wetland areas. “This is a complex project,” said Davignon. According to Davignon, the property owners want to extend the water view from the property and beautify the driveway entrance. The property has a rolling lawn to a pier in Planting Island Cove.

The commission asked questions and discussed the project with the three representatives. The commission wanted more details on a proposed footpath, any grading to be done, a perennial stream on the property, and where the septic system would be located.

The commission closed the hearing and agreed to revisit the property and asked the applicant’s representatives to provide the missing information. The hearing was continued to July 24 at 7:20.

Next up was a Notice of Intent for Warren P. Williamson IV and Lee H. Williamson of 125 Converse Rd. to perform the following activities within the 100-foot buffer zone to a bordering vegetated wetland: construct a portion of a deck, install a portion of a drainage pipe, and perform land clearing and grading associated with the construction of a dwelling located outside the buffer zone.

The home would be constructed 100 feet away from a wetland, and some of the deck is within the buffer zone. The property is located in an AE 15 flood zone. The commission discussed a proposed path to a common path used by golf carts, which connects to the communal pier. The applicant proposes to put two-foot-wide planks on 2x4s sitting on concrete blocks over the wetland area.

The commission asked Davignon to re-set the flags outlining the wetlands for another visit to the site by the committee members. The public hearing then closed.

In other business, the board held a public hearing for Ann Iannuzzi of 9 Shellheap Road for a Notice of Intent to eradicate phragmites, Japanese knotweed, Asiatic bittersweet, and other invasive plant species. Susan Nilson of CLE Engineering represented the applicant. The area is adjacent to the retaining ponds at Silvershell Beach.

“My client plans to do the work in late summer or early fall, after the phragmites have bloomed,” Nilson said. No replacement plantings are planned for the area at this time.

The board announced that they are seeking to fill a vacancy for an Associate Member of the Conservation Commission. Interested applicants should contact the Town House at 508-748-3560. 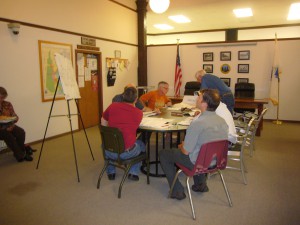