You are here: Home » News » Officials Say No to Solar Bylaw

Although it seemed during the past month of Planning Board meetings that most members’ shifting positions on the Solar Bylaw might be decided only when the music stopped, one of them was consistent in his opposition to the policy from the beginning of the process through the end: Ted North.

On Thursday, April 25, North giddily motioned for adjournment of the Marion Planning Board’s specially called meeting, minutes after the body decided it would not support the Solar Bylaw “as written.” The Planning Board is legally required to prepare a report in advance of the Annual Town Meeting beginning May 13.

“The Planning Board will draft our own bylaws for fall Town Meeting,” Chair Jay Ryder said. “As far as I’m concerned, that’s the number one priority.”

Members of the Energy Management Committee – Chair Bill Saltonstall and Clerk Norm Hills were present; member Jennifer Francis, the bylaw’s most vocal advocate, was not – were unsurprised by the decision that was handed down.

“They’ve never given us reason to be optimistic,” Saltonstall said. “Their rationale is so full of inconsistencies. We’ll continue to defend the Solar Bylaw, and we’re confident that voters will see how much it could mean for Marion.”

The Solar Bylaw, which would formalize the process for residential solar installations and allow for a Municipal Solar Overlay District on the town’s capped landfill, is included in the Town Meeting warrant signed off on by the Board of Selectmen. But the Planning Board has expressed concerns ranging from cosmetic to deal-breaking during the subsequent month of deliberations, public hearings, and work sessions. The majority of members would not bend on a desire for a special permit inclusion, for instance, while the EMC has fought it tooth and nail.

Early on during Thursday’s meeting, it appeared as if the spirit of compromise engendered during the public hearings had carried over, or even that the Planning Board had changed course. Ryder opened the proceedings by saying that he had been “second-guessing some of the thoughts I had previous to the public hearings,” adding that an opinion from Town Counsel Jon Witten on the bylaw “satisfies a number of concerns that I had … I feel, at least personally, that the Planning Board can have the control it needs without having a special permit.”

Vice-Chair Pat McArdle disagreed. “We can do that,” she said, “but we’re doing it with no teeth.”

Ryder also said that after a tour of the Fairhaven solar installation on a landfill, he was “amazed at how benign that installation was in regard to environment issues, technological issues, and operational issues. There is very little environmental concern with regard to piercing the cap, and the developer there was able to secure liability insurance. The DEP is 10 times more stringent than our special permit. I’m questioning the need for a special permit at this point.”

“It makes a lot of sense. But I’ll temper that comment by saying that I’m still not sold on the idea that of that installation being a quote-unquote garden.”

Ryder was referring to the fact that the solar district’s supply would be limited, expensive, and for private as opposed to municipal use.

“I’m not sure,” he said, “that the solar garden approach is equitable.”

Members Steve Gonsalves and Sherman Briggs agreed, saying that they supported certain aspects of the Solar Bylaw but not others.

There was no such nuance with North.

“Do you want to look at this in your neighbor’s yard? For me, the answer is absolutely not,” he said. “Marion is very much dependent on a high property tax rate base. This should not be jeopardized.”

North also called the Municipal Solar Overlay District an “unacceptable risk” and nothing more than a “harvest for lucrative incentives.”

“The public hearings have been closed,” he said. “I really don’t see a need for any more public input on the issue. We can’t have continuing dialogue on this; that’s not what this meeting is about.”

Saltonstall pointed out that Ryder had suggested another work session with the Energy Management Committee before the Planning Board was to prepare its report, and that the session never happened. Ryder made this suggestion at the last public hearing, which North did not attend.

The next Planning Board meeting – where officials will finalize report language for the Town Meeting – is scheduled for May 6. 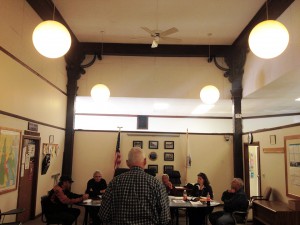