Saying that he is working toward a very conservative budget and smoothing out the number of articles in the Warrant, Mattapoisett Town Administrator Michael Gagne, shared his working budget strategic plan with Gary Johnson, Pat Donahoe, Betty Pennington, and Colby Rotler of the Finance Committee.

One of the most significant items Gagne discussed with the committee was the looming specter of crippling retirement health care benefits for former town employees. To illustrate the point, he noted problems experienced in such far-flung locals as San Jose, Calif., as well as cities in Rhode Island, where legacy health care benefits have bankrupted those communities.

Presently, Mattapoisett funds these necessary expenses on a “pay-as-you-go” basis.

“If we continue to pay-as-we-go, the liability will increase a half-million per year,” Gagne told the members. He is proposing to fund the program through an annual line item in the budget helping to ensure that expanding costs would not negatively impact the town. “It’s the prudent fiscal plan,” he told the committee.

For Fiscal Year 2014, Gagne has plugged in $298,000 and plans to add to that reserve over the years. Although it will never be a dollar-for-dollar match, it will help with the multi-million dollar price tag the full retirement commitment requires while helping to preserve the town’s excellent bond rating.

Also on the theme of health care benefits, he explained that the revised group health care benefit program currently in place for town employees is now reaping desired savings. The town negotiated a higher employee contribution for co-pay fees resulting in an overall savings to the town. He further detailed that some employees had elected to take their spouses’ health care benefit versus the town’s plan, contributing to an overall reduction in the cost of the program.      “This is exactly what you want to accomplish for the town to save,” Gagne said.

The library’s needs were noted, as Gagne will be requesting the funding of a part-time children’s librarian. The growing use of the library resources is predominantly in the children’s programs, Gagne learned during his meeting with Director Susan Pizzolato. This position will provide the community with much needed professional staffing. When asked about the contributions from “Friends of the Library”, Gagne responded that those funds were outside the town budget. This new position would come in at $19,500 per year.

On a much less financially impactful subject, but one that the residents of the town depend on, the snow removal budget is penciled in for an increase. Rather than having to find the money after the fact to pay salaries to the town personnel whose flashing lights and plows are a welcome sight on a snowy day, Gagne is requesting $20,000, an increase of $5,000 over FY13.

Landfill environmental monitoring as required by the state will necessitate an increase in order to meet the important work of ongoing issues associated with the unlined site. In 2012, Mattapoisett’s budget was zero; in 2013, $2,000 was appropriated; and for 2014 the budget line item is $10,000, an $8,000 increase. This amount will be an ongoing request Gagne said, commenting on the state’s mandate that cities and towns provide such monitoring annually.

Boston’s recent horrific bombing tragedy was part of the night’s discussion. Mattapoisett, along with other cities and towns in the area, provided aid during the event. Gagne told the committee members that he had confirmed repayment by the state to cover those unexpected expenses. He also shared that insurance is now available to cover costs associated with acts of terror. Although the town and its various committees had been made aware of such coverage, none felt Mattapoisett would require such financial protection. The group felt that at some point in the future, this option may need to be revisited.

Gagne said that some old debt would be retired, making long-term borrowing easier for the town, while also sharing that a reduction in state funding was expected. He explained that due to the “giveback” resulting from the defunct telecom tax, which had been collected, municipalities have to repay these collected fees. For Mattapoisett, that one time sum for 2014 will be $52,000.

Over the coming days, the group will continue to work on the final budget for Town Meeting. 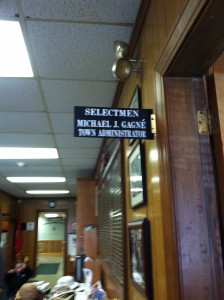