The Rochester Planning Board was joined by a standing room-only crowd for their regular meeting on Tuesday, August 28.

Sam Moffett of TRC Environmental, who spoke to the Conservation Commission last week, gave his presentation on the changes to the proposed Little Quittacas solar panel array off North Avenue on land owned by the City of New Bedford. His firm would work in conjunction with Con Ed and the Real Goods Solar company in order to complete the project.

Moffett spoke to the Board as part of the site-plan review process. It was not a formal public hearing.

“We have met with the neighborhood several times and we’ve met with representatives of the various town departments to gather feedback in accordance with your process in order to refine our design and our approach so that what we’re presenting to you conforms to the town requirements,” Moffett said.

The plan has been adjusted since its original proposal, including a reduction in the amount of acreage from 30 to 28.5 acres, as well as different drainage contours so that all the precipitation that falls on the area stays on that land. The plan also includes sand-based firebreaks around the perimeter to prevent a fire from spreading to or from the array.

Chairman Arnold Johnson said that while the contents of their plans looked satisfactory, their list of applicable waivers was incomplete, including the lack of a traffic study for the area. Moffett didn’t believe it was necessary because the land gets limited vehicle traffic.

“Because the standards of review are kind of extensive, but our standard procedure in the past for these projects was that you guys take our standards for review and go right down the list. The ones you feel don’t apply, you put a reason why you feel it doesn’t apply,” said Johnson.

Moffett said that they would go through the waiver list again in order to provide the most complete picture of the project for the site-review process.

“We want to make sure you have any site lighting or perimeter lighting and erosion control methods,” Johnson said.

The Planning Board had no questions or comments for Moffett following his presentation.

“We’re the people who are going to be most affected by this project. We have no problem with them putting a solar project there. The problem we have is what we’re going to have to look at the rest of our lives,” said Gerald Silva of 12 North Avenue.

He said that the shorter berm planted with trees and shrubs was the preferable design, but was worried about the maintenance of the area, survivability of the trees, and noise pollution that could result from the sound of traffic bouncing off the higher berm design.

“In this particular situation, the land is owned by the City of New Bedford. They have a 20-year lease contract with Con Ed,” Moffett said, adding that it would be Con Ed’s responsibility to maintain the landscaping.

Johnson suggested creating a higher berm but planting native trees in front of it rather than on top. The trees would be more likely to survive because their root systems would extend deeper and the run-off storm water could act as irrigation for the trees.

One worry that was consistent throughout the room was the issue of landscaping and maintenance of the vegetation on or around the berm.  Johnson also said that they could require the landscaping be regularly performed via an order of conditions, but said that long-term maintenance in similar past projects has been tough to enforce and issues have often resulted in litigation.

“I’m concerned that we don’t have a mechanism to enforce the maintenance.  If this is going to be a contract between Con Ed and the city, would we have to sue the city to get the trees replaced if they die?” said Planning Board member Susan Teal.  “We need to figure out what we can legally do.”

“I think we’re all on the same page that you guys are looking out for our best interests and what’s going to work there,” said Malcolm Hathaway of 28 North Avenue.

“It’s all about trying to do something that will address the best of your concerns,” said Johnson.  He encouraged concerned residents to continue providing feedback to the Planning Board and to review the information in the public record at the Town Hall.

The next meeting of the Rochester Planning Board will be on Tuesday, September 11, 2012, at 7:00 pm at the Town Hall. 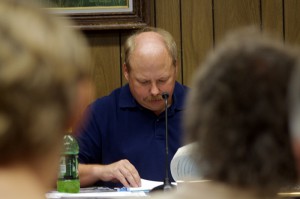