You are here: Home » News » No Variance for Cottage Street Addition

An application for a variance that came before the Marion Zoning Board of Appeals at their regular meeting on Thursday was withdrawn without prejudice because the proposed project did not meet the proper requirements.

John Van Voorhis and Susan Davies had filed for a variance to allow the reconstruction and extension of part of a dwelling at 6 Cottage Street.

“This is a pretty straight-forward project.  It’s a small addition to the ground floor off the left side of the building,” said engineer Peter Turowski who represented Van Voorhis and Davies at the meeting.

The project would fill in space next to a covered porch that extends from one side of the dwelling but slightly decreases the existing conformity of the structure.

“Essentially you’re raising the back wall, but the footprint is going to be the same,” said ZBA member Eric Pierce.  “So the only line you’re connecting is the east wall to the north wall?  The reason I’m asking is because a variance is a very difficult thing to give [due to changes in regulations.]”

Pierce explained that variances can be granted if a hardship can be proved on the part of the applicant, but Pierce said the project only seemed to alleviate space issues within the house.  If the owner cannot show that there is a material or financial hardship imposed by the project not being completed, a variance cannot be granted.

A hardship could be proven if the property was deemed to be unique to the neighborhood, but the home is located close to downtown.

“There’s no uniqueness about it,” said ZBA member Betsy Dunn.  “Legally, it has to meet all the criteria but we can’t do it.”

Dunn then suggested that Turowski request to withdraw the application without prejudice and resubmit for a special permit rather than a variance.

“It’s a reconstruction and an alteration.  We can do this under a special permit,” she said.

Turowski agreed with the assessment of the ZBA, which granted his request to withdraw the variance application.

The next meeting of the Marion Zoning Board of Appeals with be on Thursday, December 13, at 7:30 pm at the Town Hall. 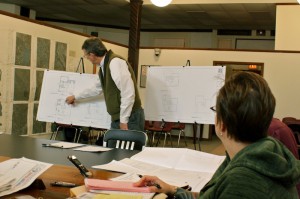