You are here: Home » News » No Touching Trees in the 20-foot Buffer

Nearly 30 residents let their concerns be known on August 25 before the Rochester Planning Board during the first public hearing for the large-scale solar energy facility slated for the Center of Rochester.

There were a number of concerns, mostly about screening around the site to mitigate the site view from various points in the center of town, but no problems arose that could not be considered or investigated by the seemingly willing to cooperate representatives from Renewable Generation, LLC.

Planning Board Chairman Arnold Johnson started off by addressing the residents: “This is a sensitive project, and people have very strong opinions,” and he reminded them, “We do not pick the projects put before us.”

Almost immediately, Johnson began listing components of the submittal he said were missing, and Bill Madden of G.A.F. Engineering and Amelia Tracy of Renewable Generation started to take notes on Johnson’s requests.

Johnson asked for soil testing, a list of waivers for the project, a rendering illustrating the sight view from various angles, and a shading plan, among other things. Johnson gave the developer an arbitrary timeframe of early October for a continuance of the public meeting and demanded that all materials completed for submission be delivered to the board at least two weeks prior to the first October meeting.

The public was allowed to speak first, though, and Madden, Tracy, and Renewable Generation President Jacob Laskin were able to address the concerns and take them under advisement.

Some questioned the selective cutting of trees within the 20-foot vegetative buffer surrounding the five acres of solar arrays. The project calls for the cutting of trees taller than 20 feet in height to prevent shading on the arrays. Board member Gary Florindo was passionate when he spoke of the history of some of those trees, especially the large “majestic” ones at the cemetery. But it was Johnson who decidedly told the developer that he would not allow any cutting within the 20-foot buffer.

Florindo said anybody could purchase that property and develop it into anything that is sanctioned under the limited commercial zone, and they would be required, under the bylaw, to maintain a 20-foot “no touch zone” buffer around the perimeter.

“And here you come along,” said Florindo, “…and tell us in that 20-foot vegetative boundary, anything over 20 feet we have to cut.” He continued, “For that group, leave it alone. For you, go ahead and cut them?”

Florindo said the board should hold the project to the same rules and regulations that anybody else in that room would have to follow if they were to develop that property.

“I’m with Gary that the 20-foot buffer is an absolute ‘no touch’ zone,” said Johnson. “Visibility is a big thing with us.” As Johnson listed the missing parts of the project submission for the site plan review and the special permit request, Johnson told the developer that all components need to be submitted together and ahead of time when the hearing is opened again in October.

“We’re not gonna piecemeal this … because then we have to backtrack … and it’s your money we’re spending on him,” Johnson said, pointing to Ken Motta, engineer hired on behalf of the board.

Former Planning Board member Susan Teal said, at first, as a close neighbor to the project, she was disappointed that a solar facility would be established in the new limited commercial zone rather than mixed-use retail and housing buildings and shops. But, as she pointed out, those uses of the land would also require clear-cutting of the woodlands and the toppling of some of the older, mature trees.

“And instead of solar panels, you’d have parking areas for employees,” Teal said. “So, at the beginning, I was disappointed…. But, frankly, as a person who lives just down the road, I got kind of pleased with this because it doesn’t require any water…” – their children would not be attending the schools, there will be no water use, no strain on the infrastructure, no light, and no noise.

“Rochester was a lot more cleared a hundred years ago,” said Teal, although she said she was bothered that some old trees would be taken down. Otherwise, aside from screening concerns, she said she had a really hard time opposing the project. “I [just] don’t want to see it.”

In other matters, the public hearing for Clean Energy Collective for the solar facility in Marion with the access road off Perry’s Lane in Rochester was continued until September 8 at 7:00 pm, the next scheduled meeting of the Rochester Planning Board to be held at the Rochester Town Hall. 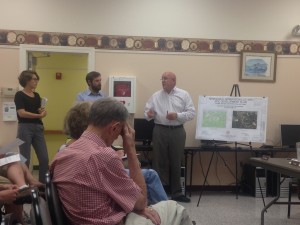