You are here: Home » News » No Touch Zone a Touchy Subject

It was long into the night with much work completed when hot buttons were pushed over the touching of a “no touch zone” on Goodspeed Island.

The request for an amended order of conditions filed by Daniel and Laurie DaRosa, 3 Goodspeed Island Lot #28, was denied after the board learned that the a previously stipulated special condition had been violated and that a DEP permit had been applied for. Originally on April 30, 2012, the permit required a special condition for a 10-foot-wide costal bank “no activity zone.” Then, in August, a request for coastal restoration work was denied but then applied for through the state’s DEP office. That office granted the permit.

Now coming before the board, DaRosa was requesting a certificate of compliance on the premise that the essence of what the board conditioned on the original permits had been complied with. The board did not see it that way.

Chair Peter Newton said, “It isn’t clear to me that the original order was to clear the entire bank.” He said he wasn’t in favor of approving the amended DEP permit, wondering if the owner created his own problems by going to the state and moving forward to clear the bank in spite of the town’s request not to do so.

Newton continued that the applicant had agreed to the “no touch zone.” DaRosa felt that by not granting the certificate he was being punished. In the absence of a certificate of compliance, the title to the property would be in encumbered.

“There are half dozen violations on this project,” Newton said. “I’m not in much of a mood to be granting a permit.”

Earlier in the day, the Conservation Commission office had received several phone calls from concerned citizens who witnessed construction activity on the beach and shoreline area at the property. There was a Bobcat removing stones and pushing sand changing the contour of the shoreline.

“We can’t grant a certificate because the no touch zone has been violated,” Newton said. “We were never informed that work would be taking place.”

“It was really disheartening to see the Bobcat going into the water,” added Board member Bob Rogers

Both Board Member Tom Copps and Newton agreed that by granting the certificate, a bad precedent would be set.

“It is just a willful disregard for the process … there is a state law,” Newton said. “We are a reasonable bunch of people, but not when people ignore the plans.”

“It is your responsibility sir,” Newton responded.

Board Member Robert Rogers said he wanted to draft a letter to the DEP asking them who is overseeing the work they have permitted, which supersedes the local permit. Noting that he wasn’t sure what the next steps might be, Newton told DaRosa they’d be getting back to him.

Much earlier in the evening, numerous pieces of businesses were conducted.

Partial Certificate of Compliance granted to Stephen and Betsy Downes off of Prospect Road.

Request for Determination of Applicability by Elizabeth Sharp and James McKay, 7 Kestrel Ln., proposing to replace the floor boards and railings to the existing deck as well as extending a new 10-by-12 section with steps on the north side on the existing deck. Applicant was released to proceed with the project.

Request for Determination of Applicability filed by Buzzards Bay Coalition for Acushnet Road, lots #7, #4, #20, 21: changes would allow the public better access to the public lands for easier use and a clearer demarcation of entrance to the trailhead areas for a parking area, signage, and more. The work is proposed to begin sometime this summer depending on funding via grants.

Request for Determination of Applicability filed by Victor Vieira, 77 Long Plain Rd.; applicant proposes to install an aboveground pool within 50 feet on the bordering vegetated wetlands – approved as proposed.

Notice of Intent filed by Linda Pinto of CSN Engineering, regarding 53 Cove Beach, lots #1, #4, #18, #18A, #34, for beach-nourishment projects; approved with conditions.

Continuance of after-the-fact notice of intent filed by D & B Quality Construction, 15 Cedarcrest Ave. lot #21, applicant proposes an after the fact filing to allow an already constructed detached shed and outdoor shower, located partially within the bordering vegetated wetlands. Dennis Lavoe/D&B Construction presented the board with amended plans, which were accepted.

Request for determination of applicability filed by Dwight Smith, 6 Windward Way, to restore an eroded lawn area caused by Sandy and remove a storm-damaged tree was approved with no special conditions.

Notice of intent filed by Neal and Debra Sandford, 4 Seaconet Rd., to demolish the existing single family dwelling and detached garage for the purpose of constructing a new home in compliance with Mass Building Code and FEMA requirements for construction within a vegetated flood zone. Plans were approved with conditions. 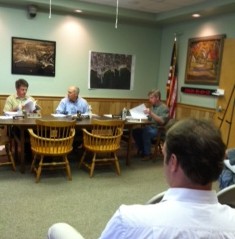