You are here: Home » News » No Snow Damage to ORR Roof

When workers shoveling snow off of the Old Rochester Regional High School roof discovered a potential structural issue possibly caused by the weight of the snow, school was canceled Monday, February 23 as a precaution.

Students got an extra day of February vacation to allow an engineer to examine the possible deflection, as ORR Facilities Director Gene Jones described the “footprint section” in question.

“Everything was fine,” said Jones on Tuesday during a phone interview. “There was no leakage, no visual damage.

Jones said a crew had been shoveling the roof during vacation week ahead of expected rain for Saturday and Sunday, and encountered the possible deflection on Sunday in the roof above the cafeteria kitchen and serving area of the building.

“It felt a little bit flexible,” said Jones, likening it to walking on a plank and having it slightly bow beneath one’s feet. “It was very minute. But anytime you have a question, you have to check. It’s the norm.”

An engineer was called and subsequently the building commissioner certified the building as safe for occupancy.

The safety of the staff and students is paramount,” said Jones. “It was all a safety factor. That’s what they pay me for. To provide a safe environment and school facility.” 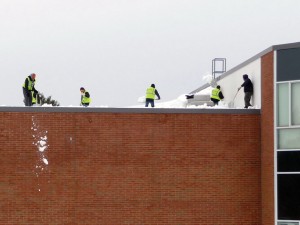